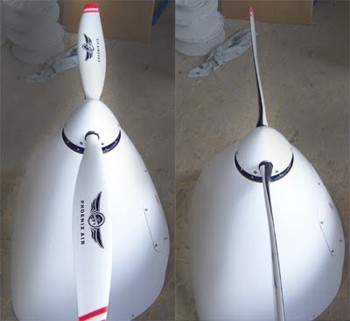 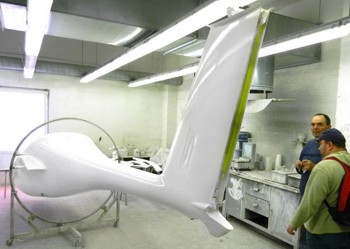 I heard again today from Jim Lee who’s still overseas helping prep the PhoEnix electric motorglider for July’s big, $1.65 million CAFE Green Flight Challenge (GFC) fuel-efficient flight competition in Santa Rosa, CA. *** Jim sent along photos of the electric nosecone with integrated feathering prop/spinner assembly. First test flights of the PhoEnix are planned in a couple weeks. *** BTW, the enhanced streamlining afforded by the much smaller e-motor boots the lovely creature’s performance from L/D 32:1 to 36:1 — a 12.5% increase! That’s great for soaring and also means less power required to sustain flight, the Big Picture for endurance at this stage of electric aviation.  *** The GFC PhoEnix entry will be powered by a 44 kW motor and controller developed in house by Phoenix Air. *** Lipo (lithium polymer) batteries, popularized by the RC model industry for their light weight and high storage capacity, will hold the electric “gas”. *** I’d asked Jim earlier how they were going to get the airplane over, joking that perhaps they’d ferry it across. You’ll see his wry response below. *** Note also his take on the cooperation between Pipistrel’s Taurus Electro team, also entered in the Green Flight Challenge, and the PhoEnix team. This brings back fond memories of the dawn of hang gliding, ultralight, then LSA flight, where pilots helped out fellow pilots because the goal was to share the joy and accomplishments with as many people as possible. ***  Once flight contests and market competition ramped up, that “one-for-all” spirit dwindled, as it inevitably does. *** Yet I’m mindful of the spirit of mutual support and shared enthusiasm that exists today in the LSA industry, where entrepreneur/pilots like Bill Canino of SportAir USA, Tom Peghiny of Flight Design and Dave Graham of Legend Cub, each with a distinctly different flying background, regularly help out their fellow pilots even though they’re all in competition for a small pool of sales dollars. *** The recent Georgia LSA Tour is a great example, I’ll have an update on that soon. *** So here’s that fraternal spirit again with the PhoEnix team inviting the Pipistrel team for a visit. Even if it is too late to steal ideas, they certainly don’t have to help one another, especially with all those greenbacks at stake.  *** Makes you want to rethink this whole competition thing from top to bottom, doesn’t it?   *** Here’s Jim’s email: “I have enclosed a spy drawing of the Pipistrel entrant to the GFC. Two Taurus joined together by a center wing a la Twin Mustang of WWII fame. Pretty interesting, eh? The Pipistel boys visited us a few days ago to look at our design. Anyway, from their description we put together this drawing. Everyone realizes that it is too late in the game to copy each other and the prize is too hard to win so cooperation is in order.” *** Jim went on to answer a question I had about flying the PhoEnix which, unlike the SLSA version, has retractable main gear to optimize performance. Jim had brushed me up (I’m a lazy FAR reader) on the FAA regs, which allow a person with only a glider rating to fly a self-launching (powered) sailplane without a flight medical. This time, I asked him whether the same allowance held for a retractable-gear glider, and here’s his reply: *** “There are only 3 logbook endorsements with the glider rating: self-launch, aerotow, and ground launch. Practically every glider is a taildragger for decreased drag (except for a few oddballs). Most gliders have retractable gear. Many are ‘high-performance.’ Some have variable pitch or folding or feathering props. There are no endorsements for any of this as there are with airplanes. So a glider rated pilot with a self-launch endorsement can fly a retract motorglider.” *** And finally Jim’s tongue-in-cheek response to my question about bringing the PhoEnix to California for the GFC in July: *** “We will fly the PhoEnix across the Atlantic east to west. We don’t have quite enough battery storage to make the whole flight, so we will have to soar a container ship across. We are looking into sailing schedules out of Bremerhaven now. The GFC will be a piece of cake once we do this! :-)” *** Thanks again Jim Lee for giving us an inside look to what I very much believe will be an historic event.