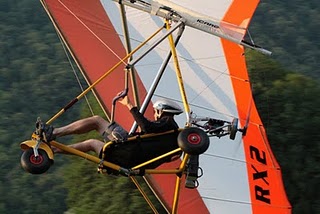 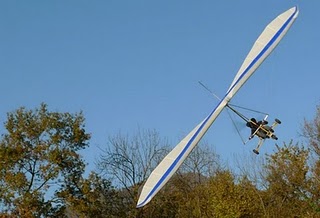 Everybody laments the high cost of LSA ownership: here’s an alternative…especially if you like true bugs-in-teeth aviating like our winged forefathers…uh, and foremothers of course…er, forepersons?  Sheesh.  Staying PC is so last week. *** Manfred Ruhmer, the German hang glider world champion and one-time distance record holder of 435 miles (current record is 444 mi.!), has been working on his own electric-powered trike – named the Icaro 2000 Pit-Trike. *** Chalk up that curious name to translation from the Italian.  Maybe it grabs the air like a pit bull?  Icaro’s price page calls it Nano Trike – take your pick! *** BTW, a “trike” is a wheeled undercarriage, powered by a pusher-prop powerplant, that allows a conventional foot-launched (or aero-towed) hang glider to fly under its own power.    *** The trike unit without hang glider wing lists between $11,000 and $15,000 US, reports my pal Dan Johnson, before shipping, *** and you still have to add your own hang glider – another $3K to $6K. *** Still, here’s an electric-powered aircraft you can own for as little as $15,000 or so! *** Before we go further, check out this video.  And note when the pilot (it’s Ruhmer himself) shuts down the power while soaring in ridge lift over the trees.  The prop folds to streamline and the lightweight trike becomes a soaring machine.  Now we’re talking! *** Icaro produces the design as part of its Light Trike line.  It’s a long-respected maker of hang gliders. *** What’s encouraging is this is yet another electric-powered aircraft to come to market.  Electric powered vehicles of all types are the coming thing, believe it. *** Other notable electric projects we’ve talked about recently: *** — Several models from China’s Yuneec (all-electric award-winning E430 SLSA, “paramotors” for paragliders, and another hang glider trike still in development, being test flown by another big hang glider name – France’s Gerard Thevenot). *** — FlightStar’s e-Spyder, in advanced development at Yuneec with Tom Peghiny’s oversight (it’s a modified FlightStar which Tom produces) *** — Randall Fishman’s American-made ElectraFlyer Trike, ElectraFlyer C and ElectraFlyer X two-seat SLSA. *** But unlike many others still coming to market, you can buy Icaro’s trike now. *** Prayer to: God/Santa/Gaia/Buddha/Jahweh et al.: please please please let Icaro show up at Sun ‘n Fun so I can whangle a ride.  Or the newest eSpyder prototype.  Or the Yuneec e430 again.  Or all of them. *** Amen. *** —images and video courtesy Icaro