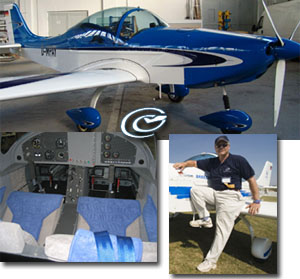 The early reviews — mine included (report here) — were excellent. The Breezer design from Germany is a great flying aircraft. Then problems arose…though fortunately not with the airframe but with design rights and such. Now that those difficulties are resolved, new aircraft are again arriving in the U.S. “The new Breezers are here!” declared Josh Foss, head of Sportsplanes.com, a Utah-based organization with reps around the country. He plans to display the new Breezer model at the AOPA Expo in Connecticut October 4-6, 2007. *** Breezer II features a much larger baggage compartment, an enlarged panel, and heavy duty toe brakes that replace a handbrake lever. Josh added, “Breezer II is now being manufactured in a new 17,000 square foot facility in Germany that has been equipped with the latest in high tech machinery geared for large volume. The facilities include a private airstrip for flight testing. Expectations are to reach 100 aircraft annually by 2008.” Breezer II is a two-seat, low wing, all-aluminum LSA and joins the other airplanes in Sportsplanes.com’s line up.