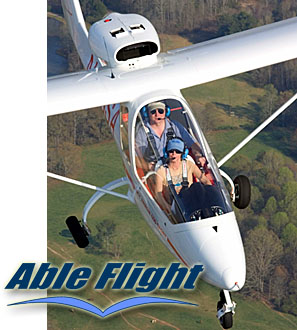 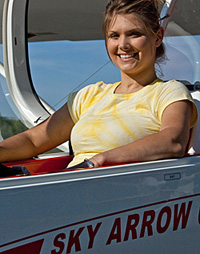 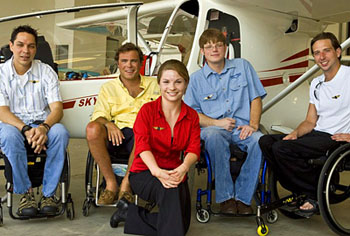 No, this article is not about an established flight school operation. Nor is it about a university training program, or some government flight training facility. I’m simply impressed that Charles Stites and his Able Flight nonprofit organization have brought so many new pilots into the fold. For this alone, he deserves applause. Add that he exclusively helps persons with disabilities and you have something noteworthy. *** Here’s a contrast… At the AOPA Summit to begin this week, a group of leaders will meet to discuss ways to reverse the depressing 70% drop-out rate of flight school students. On the other side of the compass, “Able Flight achieves a very impressive completion rate of at least 72% for recipients of its full scholarships,” revealed Stites, who founded the organization in 2006. Able Flight didn’t set up shop to be a major flight school. Yet hear this: “We’ve awarded a total of 30 scholarships as of September, 2011, and 24 are full scholarships that can lead to a license. Of those 14 are already licensed pilots, three are in training, three are yet to begin, and only four have dropped out.” *** How does Able Flight do it? “It’s not that their training is easier,” explained Charles. “If anything, it’s more physically demanding for a paraplegic or a person who has lost a limb. Our students never get a break meeting the same Sport Pilot Practical Test Standards that all applicants must complete.” To some extent, the Able Flight advantage is matter of personnel management. “Able Flight student pilots know they are being matched with good flight instructors at schools that care about their success.” In addition, Able Flight has assembled a cadre of people students can ask for extra assistance. “In short, each student is backed by people who want them to succeed. Now, is that so hard?” *** Evidently it is hard or we would not have a 70% drop-out rate at conventional flight schools. I’d say the AOPA roundtable attendees have their work cut out for them. They could do worse than to study the success story known as Able Flight. Kudos to Charles, his financial and other backers, but most of the credit stays with instructors who care and highly motivated students, who repeatedly prove that someone with sufficient determination can accomplish almost anything.