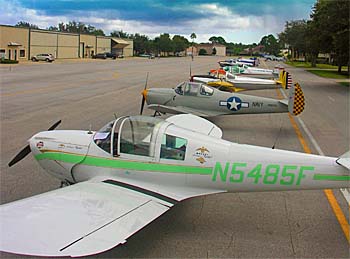 A row of Ercoupes (11 altogether) lined the broad parking ramp at Spruce Creek on Saturday, October 5, 2013. The green-striped Ercoupe (5485F) is a rare Mooney manufactured version. 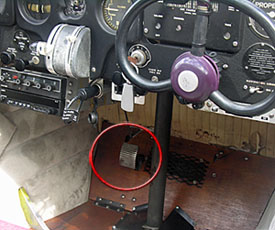 Ercoupe’s floor is uncluttered with only a brake pedal and no rudder pedals. 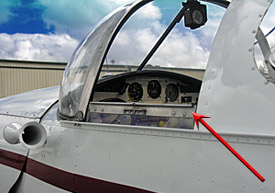 Most Ercoupes on display had curved side windows that slide down into the fuselage. A few have been fitted with aft-sliding canopies (such as the very rare Mooney model seen at the event).

Most of our attention is paid to either Light-Sport Aircraft, both SLSA and ELSA, or to light kit aircraft that Sport Pilots may fly. Yet another worthy category exists: Standard Category certified airplanes that can also be flown by someone with or exercising the privileges of Sport Pilot. Recently, my home airport, Spruce Creek Fly-in near Daytona Beach, hosted an Ercoupe event that brought 11 of these charming and distinctive airplanes. Spruce Creek is home to more than 500 airplanes and more than 500 hangar homes, along with another 1,100 homes. The diversity of aircraft is broad from ultralights to bizjets and military jets and everything in between including one of the largest fleets of RVs anywhere.

Ercoupe, first manufactured by Engineering and Research Company (ERCO), is a low-wing mostly metal airplane with fabric covered wings. Production started before World War II aiming at a very low cost, very safe airplane. Several other manufacturers continued its production after the war including Mooney Aircraft, whose M-10 first flew in 1968. Ercoupe was designed by Fred Weick to be the safest fixed-wing aircraft that aerospace engineering could provide at the time. Fred’s creation first flew in 1937 and production ran from 1940 to 1970. Nearly 6,000 were built. Wikipedia reported, “In 1946 alone 4,311 aircraft were produced and sold at a cost of $2,665, the same price as in 1941. At its peak, ERCO was turning out 34 Ercoupes per day operating in three shifts. The aircraft was aggressively marketed through non-conventional outlets such as the men’s department of the Macy’s department store chain.” (Note that $2,665 in 1941 is equivalent to $42,400 today.)

Designed without rudder pedals, Ercoupe is flown using only the control wheel. A two-control system links rudder and ailerons to manage yaw and roll with the control wheel, which also determines pitch and steers Ercoupe on the ground. This design feature eliminated the need for rudder pedals so the only pedal on the floor is a brake (photo). Wikipedia reported, “A completely new category of pilot’s license was created by the CAA for Ercoupe pilots who had never used a rudder pedal.” I asked several Ercoupe owners how they handled a crosswind landing. All said it presented no great challenge, that you simply fly a crab angle approach touching down slightly sideways taking care to hold the nosewheel off the ground. Ercoupe’s trailing link main gear is up to repeated such landings and most agreed even a 25-knot sharp crosswind was not a problem.

Ercoupe’s type certificate was sold to Univair Aircraft Corporation of Aurora, Colorado in October, 1974 and remains with Univair. However, the company produced no new aircraft instead focusing on replacement parts and providing technical assistance to Ercoupe owners. Some Univair Ercoupe 415-C and 415-CD models meet the FAA parameters (such as weight and speed) and can therefore be flown by pilot possessing a Sport Pilot certificate or by a higher rated pilot exercising those privileges. You can buy an Ercoupe for less than $10,000 or pay as much as $40,000 (the latter significantly restored). Learn more at the Ercoupe Owners Club website .