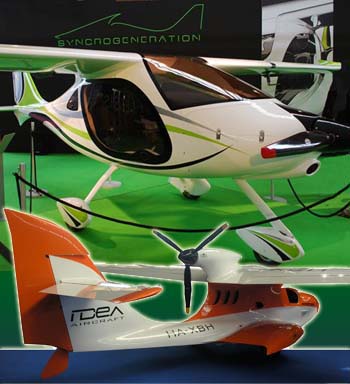 Aero Innovations — Not only do Light-Sport Aircraft cost much less than new GA aircraft, but this segment of aviation gives birth to creativity less common among Type Certificated aircraft. Above we see a clean, composite Hungarian seaplane and the super-sleek Synchro from FlySynthesis of Italy as seen at Germany’s Aero show.

I check news sources in several ways: print, Internet, broadcast. I also check news on my iPhone and today the top U.S. headline on my news server (Mobile News Network, an Associated Press outlet) read: “Economy Buffeting Student Pilots, Flight Schools.” The story from AP’s Dayton, Ohio office was professionally written by James Hannah. He did his research by contacting various student pilots and flight school operators plus a spokesman for AOPA. Those interviewed related the dream of flight but lamented the cost of a Private license, which was repeated at the $10,000 price level. The costs of lessons, fuel, and rental or ownership were all faulted for being too high for today’s precarious economy. *** The leading 27 paragraphs of the article drove home the high-cost of flying… but finally, in paragraphs 28 and 29 (of 31 total), author Hannah referenced Sport Pilot (though with not one word about Light-Sport Aircraft). He got it right saying, “The license costs half as much and can be obtained twice as fast.” *** My message about this article — which, I repeat, showed up at the very top of U.S. news headlines from a large news organization — suggests that cool as our LSA airplanes are and as cost efficient as the Sport Pilot certificate is… most folks, even in aviation, have more to learn about them. If that’s an accurate statement and if our Light-Sport Aircraft are as much fun as we think, then growing sales should follow increased awareness of SP/LSA.