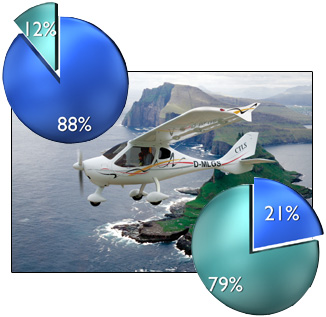 In Europe, airplane segment counts are upside down compared to U.S. figures. In the USA approximately 200,000 single engine airplanes are registered. Of these, more than 25,000 are homebuilt aircraft, and around 1,400 (less than 1%) are Special Light-Sport Aircraft. Conversely, in Europe, general aviation aircraft up to turbines number about 50,000, while microlight (European “ultralights”) and non-motor-powered aircraft number 180,000 to 200,000, reported Liz Moscrop for AvWeb in late January 2008. Sport is king in Europe with regard to the number of aircraft; GA represents only one-fifth of the total. Could this signal a changing face of airplane segments for the USA? Will Light-Sport Aircraft truly become a significant chunk of the fleet as have kit-built aircraft (which did so over a time period of 25-30 years)? *** In Europe, Moscrop reported, sport aircraft activity also accounts for much faster growth than the GA segment. But, here’s one fact that I feel American GA or the airlines have yet to recognize: “Recreational and sport aviation is one of the big sources of qualified aviation staff for airlines.” In Europe, young enthusiasts learn about flying in air sports before pursuing careers in commercial aviation.