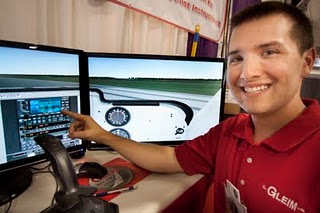 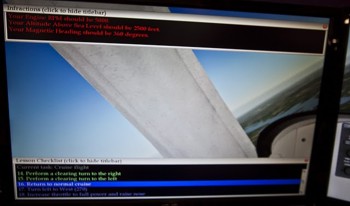 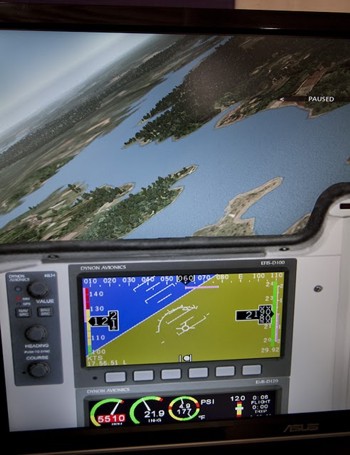 One section of the center screen shows how detailed and true-to-life the simulator is.

Today was not a typical Oshkosh day, and certainly nothing like yesterday, which was downright idyllic with its sunny skies, refreshing mid-70s temps and puffy clouds to complete the chromatic joys of a perfect green summer day in Great Lakes country. *** In short, it rained until late afternoon, but by sundown the skies mostly cleared with the promise of hotter, more humid days ahead. Today was the perfect kind of day to walk around, dodge the liquid sunshine, meet and greet old friends and make new ones, and see what’s shaking in the main display hangars and booths strewn all over Airventure. *** I’d wanted to check out the Gleim X-Plane VFR Flight Simulator I’ve heard so much about. I had the benefit of a stirring presentation by Aaron Wiseman, who energetically took me through all the main features of the system which has caught on at a number of flight schools already. *** It’s cool! A really effective approach to flight simulation that can also save flight schools and their students real money. *** Being able to realistically drill and anchor in-flight control feel, situational awareness and cockpit procedure skills before students actually get in that infamous “worst classroom in the world”, while also shortening expensive flight training hours,without breaking the bank, should appeal to flight schools wanting higher student completion rates…and what school doesn’t want that? One of several advantages of the sim is how instructors can take a student through a full flight lesson on the ground, help students through rough patches, pause the routine and explain new concepts or problem areas, then take the student out for a practical lesson in the airplane when ready. *** There’s a lot to say about Dr. Irv Gleim’s latest brainchild, and for that I urge you to go check out the info online here. *** Be sure and watch the video at the bottom of the page for a quick intro. *** For now, I’ve only got room (and late-night energy) to point out some key points. *** [] The three-screen system, complete with Dell XPS computer, three screens, stick, throttle and rudder pedals (flight school version) is dramatically cheaper (around $5000) than similar simulators which cost tens of thousands of dollars. *** [] Students can install a less-expensive version on their own home computer (many of us have two screen systems now, so only a third screen would be required). The private user version is still in development and should market in the next few months. *** [] It was developed for use in Remos Pilot Centers and has become very effective through continual feedback refinement with Gleim’s programmers. The system I worked with was set up for a Remos GX and it was suitably smooth, light on the controls (I was constantly over controlling until I relaxed a bit) and very realistic. *** The three screens give an excellent panorama view, and the background can be located right at the airport where students are being trained, and conform to the type of aircraft they’re training in, for even more realistic — and transferable to the cockpit — skills. *** Lou Mancuso of Mid Island Air Service of Long Island, who’s had a lot of success training people in LSA for several years now, raves about this system. *** Thanks again to Aaron Wiseman for his thorough briefing. I’ll be writing more on this in my Oshkosh top new products article for the magazine.