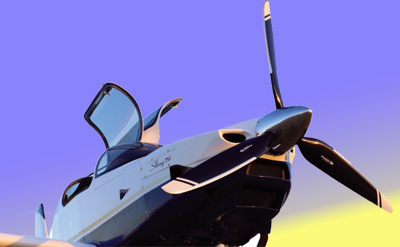 When Rotax debuted their new 915iS engine at an Oshkosh press conference, Sling designer Mike Blyth raced forward at the end of the conference to closely examine the new power plant. It was clear to me this answered a creation he had in mind and now we can see the fruit of his ambition: the new Sling TSi.

Since the Rotax 915iS remains a powerplant that requires an in-flight adjustable prop, it cannot be used on a Light-Sport Aircraft, but TSi is based on The Airplane Factory’s Sling 4 four seater so kit-built it must be. More on the builder effort below. 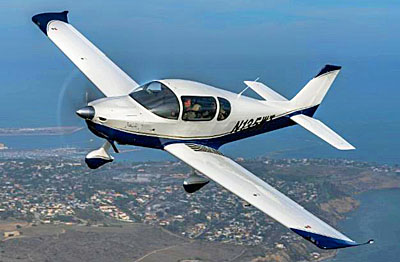 For Oshkosh 2018, The Airplane Factory USA said, “[We are] excited to present the North American debut of the all-new Sling TSi! This kit is the airplane Sling fans have been waiting for!” The Southern California importer said TSi has all of the style, economy and practical utility of the Sling 4 but with more speed. Harnessing the power of the new Rotax 915 turbo-charged, fuel-injected, and FADEC engine, Sling TSi can cruise at speeds up to 145 KTAS (167 mph) at 9,500 feet.

Sling TSi has speed modifications not on Sling 4 including an all-new high-speed wing design that has been optimized for the power and weight of the aircraft. In addition, leading edges of the wing and forward fuselage and empennage are now flush-riveted for reduced drag.

On the inside TSi has seating, ventilation, and heating improvments for passenger comfort and luxury.

“Sling TSi was hands-down the hit of the show,” exclaimed The Airplane Factory USA. They reported one media outlet dubbed it the “Best New Sport Plane of 2018.”

At an upcoming event at TAF USA’s base of operations — KTOA Airport in Torrance, California — the importer is closing a strong year by hosting one of their TAF Sling and Sling Flying Club Taco Social events. 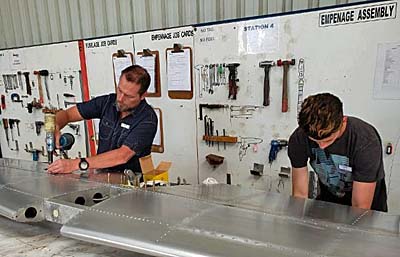 In addition to the Taco Bar treats (it is Southern California, after all, just a few miles from the Mexican border), attendees can hear about a most unusual Builder Assist experience.

The “Main Event” will feature a presentation by Wayne and Matthew Toddun who traveled to South Africa to build their Sling TSi. Not only did the father and son travel half way around the world to build their Sling TSi, the aircraft was subsequently re-assembled in Oshkosh and shown to visitors before it was flown back to Los Angeles.

TAF said that according to Matthew Toddun, “When my dad decided to purchase a new Sling aircraft for us to learn to how to fly, he went for the very best, the brand new Sling TSi!” Matthew continued, “When he decided [to pursue] a build assist program, he wanted the best assistance that we could get.”

”That is when our life-changing opportunity came about,” related Matthew. “[We would] travel to South Africa to build the first conforming Sling TSi. We spent a little over two weeks working side-by-side with the experienced factory crew, learning the ins and outs of our new plane, and assembling it piece by piece.” It was this Sling TSi that was revealed at Oshkosh 2018.

After Building, Learning to Fly Sling

Once you’ve built or bought a Sling aircraft, you can travel to SoCal and be trained at TAF USA’s new New Sling Pilot Academy.

TAF USA also announced, “Next Year we are starting the Sling Pilot Academy to help prepare pilots for the airlines.” However, If you’re not in Southern California or don’t wish to travel to Torrence, you have another attractive alternative run by a veteran flight trainer.

“Life is grand in Carson City, Nevada at the Sport Aviation Center, said proprietor Paul Hamilton. “This has been a great year for flight training in the Sling. We have had a number of Sport Pilots go through the complete course from start to finish and successfully take their check ride.”

Paul continued, “We are also teaching private pilots in the Sling LSA and now we have successfully completed three Private Pilot training and checkrides in the Sling. Additionally, two CFI long-expired certificates were reinstated with Sport Pilot CFI checkrides per 61.427. The Sling has been a reliable and tough workhorse and everybody loves how it flies up in the mountains. Check us out here.