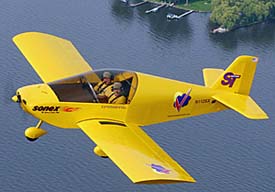 The Sonex airplane and company is based in Oshkosh Wisconsin near EAA. 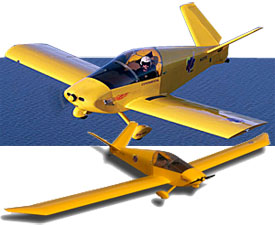 Want something different? Sonex probably has a model you’ll like and they all have remarkably low prices. 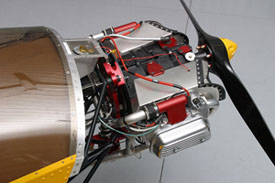 Dick VanGrusven created the extensive RV line with more than 8,000 flying. Read my flight review of the RV-12.

Two key members of AKIA stopped by the LSA Mall at the new & improved Paradise City last week. AKIA? The Aircraft Kit Industry Association is a new group formed in July last year seeking cooperation between kit aircraft builders. Leaders include Van’s Aircraft and Sonex. Both have been making Light-Sport models, or what more correctly might be called “Sport Pilot eligible” or “Light-Sport-compliant aircraft.” Experimental Amateur Built (EAB) aircraft are technically not LSA even if they meet all parameters. Sonex and Van’s are upstanding producers of very popular aircraft and they have their eyes clearly on the light aircraft sector that is showing great resilience in a perpetually sluggish economy. Each company has too much info to fully cover here but a birds-eye view may encourage you to seek more.

Sonex Aircraft is based in Oshkosh, Wisconsin, right across the field from EAA’s headquarters. The company is so active on so many fronts that I will only provide a general view. However, their nicely-designed website is chock-full of information. One cool story involves a fellow, Michael Jackson, who is ambitiously building his Xenos Motorglider fuselage and wings in a Jersey City townhouse; I loved the photos of him hauling an aircraft out the front door. It takes considerable effort to keep a website up-to-date and the Sonex staff obviously takes great pride with their’s. SonexAircraft.com is easy to navigate and I suspect you could spend hours viewing all that is available. Their aircraft (photos) include Sonex, Waiex, Xenos, or Onex. Every one can be built for remarkably little money, no doubt a major reason for their ongoing success in the kit aircraft business. I’ve gotten to know several of their staff and find them to be smart, honest folks, which adds to the appeal of doing business with them.

Sonex has it all: a single place, folding wing machine called Onex (“one-ex”); two place models bearing the company name Sonex, a Y-tailed variation called Waiex, and a long winged motorglider called Xenos. They’ve experimented with electric-powered models along with a jet powered version — cleverly named SubSonex — and if that wasn’t enough, they have their own engine line called AeroVee, which by the way, you also build as a kit. For all their kits, the Sonex team regular does builder workshops; they’ve trained more than 2,000 people this way. Sheesh! Have these Oshfolks left any stone unturned? It sure doesn’t seem so. I’ve flown a couple of these models over the years though I profess to liking the Xenos motorglider as I love the ever-changing challenge of catching and riding thermals aloft.

Van’s Switches Gears — Leading the kit industry is Van’s Aircraft with a remarkable 8,100+ RVs flying. Now the top dog is moving slowly into what they call a “trial production” phase of fully-built RV-12s. “We’re kind of taking it gradually into this new arena,” Dick VanGrunsven told our friends over at AVweb (listen to their podcast). Van’s announced a deal to build ready-to-fly RV-12s at last year’s AOPA Summit. AVweb reported Van’s “almost instantly got the support … needed to start its trial production run” in concert with partner Synergy Air of Eugene, Oregon. AVweb went on to observe the first dozen aircraft were sold the first day and several others were put on a waiting list. Now I understand the initial run is almost finished; deliveries are expected by summer 2013. I’m excited by Van’s entry to fully build and their way to do it shows one of the many ways the LSA rule is unique.

You can watch videos about the RV-12 here and here. • See a video
with Sonex CEO Jeremy Monnett where we look at their AeroVee engine plus several of their aircraft models. • Also check out more than 250 videos, all about light aircraft and every one free.