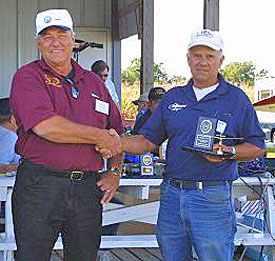 A Challenger II flies in a paint design created by Dave Goulet.

He had one of the longest runs as president of an airplane manufacturer and guided his company to produce an impressive 4,000 aircraft. Few other companies can boast such a record. I am writing about Dave Goulet, president of Quad City Aircraft. Dave passed away last week after a battle with cancer. He was 68 years old. The company he founded in 1983 has supplied low-cost, well-flying aircraft. Over the years I’ve had the pleasure to fly and report on most of Quad City’s models and you can click Challenger to read more. In this 2011 video, Dave discusses his airplanes that can be bought for $25-40,000, numbers that include everything you need to fly and, as he reported on camera, build times can be as low as 150 hours thanks to all the work Quad City does at the factory. In celebration of the long run for the popular flying machine, a couple hundred people drove and 56 Challengers flew to Erie Airpark in Illinois on September 19-21, 2008 to celebrate the 25th Anniversary of the Challenger line of aircraft. Though often speaking in a soft voice, Dave was surely in his element among the large flock of Challenger pilots who have so enjoyed flying his creations.

“I started the company in 1983, and I still own it,” said Dave a few years back. “In fact,” he added in the earlier interview, “it’s probably the oldest ultralight company still under the same management.” After reviewing all the ultralight companies still operating, I agree with his assessment. Although he had associates Goulet was the main man behind the Challenger aircraft design and Quad City Aircraft company. Thinking of other long-term operations, Goulet mentioned Kolb Aircraft, Quicksilver and CGS Aviation run by another longtimer, Chuck Slusarczyk. However, the first two sold several times and even Chuck dabbled with outside ownership and management before finally selling the company. That left Goulet standing tall as the person holding the reins for the longest continuous operation of an ultralight aircraft company. Rans Aircraft boss Randy Schlitter has been at it a comparable amount of time and did once make ultralights. However, for the type of aircraft most people think of when they hear “ultralight,” Quad City Challengers are a leading example. The Challenger design has been an unqualified success for more than three decades. According to representative Carol Oltman the company will continue to manufacture and sell Challengers. I’m sure Dave would be very pleased to hear that.