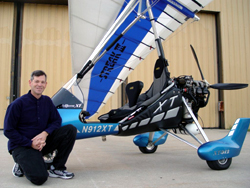 In mid-May 2005 SPLOG announced the weight-shift aircraft ASTM standards were done. Indeed, they were, but implementation was stopped with a lengthy appeal. After a 40-page defense, the appeal was subsequently overturned and the specification was again put up for vote. This time it passed, and trikes finally have a standard. AirBorne’s XT series trikes are already certified to government standards in Australia so the down-under company should qualify for SLSA with relative ease. After the new standard was confirmed, Eastern U.S. AirBorne rep’ Terri Sipantzi of Precision Windsports reported, “AirBorne is now taking orders on SLSA XT-912s for delivery in February.” He encourages potential customers to lock in 2005 prices with an order and deposit placed now. The race begins to see which trike will be first with an SLSA certificate.