Vulcan C-100 first appeared in the USA at Sun ‘n Fun 2010 and now again at the Midwest LSA Expo 2012 with new representation.

Vulcan can be sold in Europe with retractable gear. 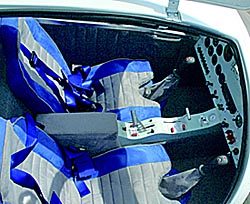 SAB’s Vulcan isn’t entirely new. The design has existed in Europe and arrived in the USA more than two years ago but stealthily avoided our radar as a Special Light-Sport Aircraft until the 2012 Midwest LSA Expo at the Mt. Vernon, Illinois airport. The secret is out now and Vulcan C-100 has been added to our SLSA List and comes at #127.

Basically, the Italian SAB Aviation jumped the Atlantic into the American LSA market with their derivative of the famous Falco kit aircraft. The low-wing all-metal design first arrived to importer Phil McCoy and his Florida-based Light Sport America enterprise. McCoy promoted the introduction at Sun ‘n Fun 2010 but evidently didn’t complete the process for the Vulcan C-100 to earn its Airworthiness Certificate.

Representation at the Midwest LSA Expo was by the team of Niley Church and Valter della Nebbia under the business name SAB Aviation of Americas. Valter also supplies another Italian airplane, the ICP Savannah. Their association is so new their Internet presence (www.boomeranglsa.com) still refers to their dealership for the Jabiru J-230 and J-170 models though Niley said they were at work on a revised website.

SAB Aviation is described as a more recently established division of SAB Aerospace, an Italian manufacturer of unmanned aerial vehicles and satellite components. SAB found entry to the light aviation market by purchasing Italy’s Corivi Aviation, which had been offering the C-100 as a European microlight kit-built airplane. The company had created a retractable gear version for the EU market and also prepared a fixed-gear version that could meet LSA rules.

Specifications for Vulcan C-100 include a main structure built from 2024 aluminum; wing span at 26.2 feet; wing area is 114.2 square feet; and fuel is supplied from two wing tanks, each with 12.7 gallons capacity. Vulcan can reportedly cruise at 111 knots and offers a 573 pound useful load resulting in a respectable 421 pounds of payload with full fuel. Vulcan is powered by the 100-hp Rotax 912 ULS engine. Hydraulic disk brakes are operated with a single cockpit lever.

Falco has long been a revered European design (though rather different from the Vulcan) and U.S. representative Niley Church described Vulcan’s “sexy lines” mated to a familiar analog instrument set up, though the panel is easily large enough to accommodate digital glass screens if a customer wishes. Niley indicated a probable selling price of about $125,000 but noted that they are still about six months away from having a ready-to-sell product. As the team of Church and della Nebbia get closer to market-ready, we’ll supply an update.