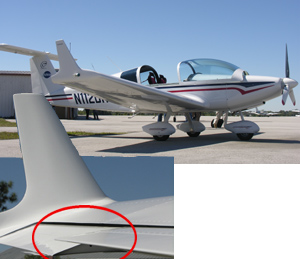 Many pilots are drawn to an airplane with winglets, but it may be the reflexed flaps that do more for Skylark’s top speed (approximately 130 mph). Inset photo shows neutral ailerons with the flaps positioned slightly above (circled). You can read my Skylark flight review in EAA Sport Pilot for May 2007.

When you walk up to Skylark, you get an impression that usually lasts (a marketer’s dream come true). While uncommon in light sport aviation winglets are well established on fast airplanes from bizjets to airliners. As a design feature, winglets that stick in your mind make the wingtip device a winner for sales reasons; any aerodynamic gain is icing on the cake. *** Burt Rutan is credited with first using the idea on his VariEze in 1975 and it was subsequently used by the Learjet 28 and the McDonnell Douglas MD-11. But the concept was invented even before the Wright Brothers first flight, way back in 1897. Even then they knew about wingtip vortices. Get more winglet info. Skylark has become Sportsplanes.com‘s top-of-the-line LSA, flanked by the Breezer, C42, and American Flyer. Skylark was designed by Canadian David Marsden, who engaged Dova of Czech Republic to built it, later selling them the design rights. Skylark is an all-metal SLSA.