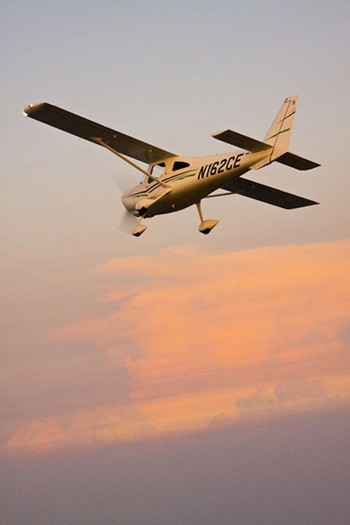 The last ride into the sunset for the C-162

A story posted by Daniel McCoy, a reporter for the Wichita Business Journal, claims the star-crossed Cessna 162 Skycatcher will likely not enjoy the longevity and success of other notable Cessna icons such as the C-172 and C-150/152. Skycatcher was one of the first SLSA out of the gate for the new category created by FAA in 2004. But troubles with manufacturing and two highly publicized airframe parachute deployments during flight testing, including an airframe redesign after the first one, contributed to the dark cloud that seemed to follow the once-bright promise of Cessna’s entry. The market-perceived lackluster specifications sheet and barebones/industrial interior finish relative to many other LSA entries also contributed to the steady attrition in the once-1000-plus order sheet for the Skycatcher.

The news came yesterday at the NBAA (National Business Aviation Association) confab in Las Vegas. Company CEO Scott Ernest made the remark that Skycatcher had difficulty attracting market share and had lost a sizable percentage of its multi-year back orders. Ernest said he saw “no future” for the aircraft. Cessna’s prop aircraft division jumped into the discussion soon after by stating that there are still Skycatchers available for delivery in the aviation giant’s inventory and that the C-162 is still officially in the company’s product line. McCoy goes on to cite GAMA (General Aviation Manufacturers Association) data that shows no deliveries of the troubled LSA through the second quarter of 2013. Just 19 were delivered in 2012. Although there was a surge in deliveries, once production wrinkles were finally ironed out at the main assembly factory in China, it now seems likely Cessna will not overtake Flight Design as the top-selling LSA manufacturer.

Skycatcher was the brainchild of former Cessna top dog Jack Pelton, who moved on rather abruptly in 2011 to take over the reins at EAA (Experimental Aircraft Association) after a reported $38 million dollar loss at the Wichita-based company. Originally targeted by Pelton to cost under $100,000, once the design was stabilized, it debuted at $109,000. Still, more than 1,000 would-be owners signed on. The general consensus for the surge credited Cessna’s proud history at producing quality aircraft for the strong initial market support. Then came setbacks – years of them – and the gradual attrition from the order book rank and file. When the price skyrocketed to $149,900 in 2011, the airplane likely lost whatever enthusiasm remained.

Perhaps some hard bargainers will wrangle a lower price for those Skycatchers in inventory. We can assume Cessna will continue to support the fleet, which will in time likely number around 300 delivered. Meanwhile, perhaps the best lesson from all this for industry watchers can be attributed to AvWeb’s Paul Bertorelli, who put forth the notion that if Cessna can’t successfully build a cheap LSA, perhaps we should stop complaining about what is clearly impossible. Indeed, I’ve long urged us to instead celebrate the variety, sophistication, reliability and entry-level affordability the current fleet brings us today. Remember, a new Cessna 172, the mainstay of entry level flight training for decades, now costs north of $400,000. Although LSA registrations in general were down a bit in 2012 for a variety of reasons that had more to do with delivering existing inventory and conservatively slower production rates than lack of support for the industry, 132 SLSA models have been accredited to date thanks to the successful ASTM/FAA partnership program. Meanwhile, rest in peace, Skycatcher: we hardly knew ye.