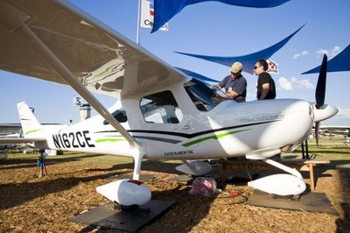 No details yet from Cessna on the crash of its second Skycatcher (AKA Cessna 162). According to numerous online reports, the SLSA production prototype crashed March 19 while on a flight test near Wichita, Kan. *** A Kansas cable tv news channel posted a story online that claimed the plane landed under a BRS ballistic airframe parachute canopy, hit a fence and flipped over. *** Good news: the pilot was not injured. *** That’s about all the good news though for Cessna, which had reworked the vertical stabilizer and rudder after its first prototype crashed in a stall-spin accident last fall. *** According to Cessna personnel, the company had conducted further wind tunnel tests after the first crash, then picked one of two aerodynamic solutions which led to the tail mod. *** A Cessna spokesman also commented on a recent online video that Cessna had begun production on the Skycatcher at the Shenyang Aircraft Corporation, China plant. No news yet whether production will be halted, or if so, for how long. *** Cessna had hoped to have first deliveries for the more than 1,000 orders in the second half of 2009. All that appears to be in limbo for at least the next few days to weeks, until the cause of this latest crash is revealed by NTSB investigators.