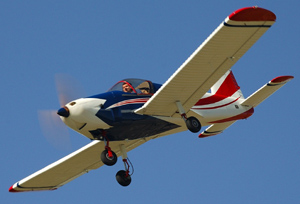 Dallas, Texas-based IndUS Aviation earned their second SLSA model approval with certification of the T-11 Sky Skooter. Powered by the four cylinder, 85-hp Jabiru 2200, Sky Skooter becomes the lighter sibling to the potent Thorpedo, which uses the 120-hp Jabiru 3300 on the same airframe. Compared to IndUS’s T-211 with the Continental O-200 engine, the smaller Jabiru saves 100 pounds. Fuel burn is stated as 4 gph at economy cruise. At the design’s birth in 1944, Sky Skooter was designed around a 50-hp Franklin engine. With the lighter engine, the 2006 Sky Skooter tips the scales at a modest “645 pounds empty,” commented Ram Pattisapu, owner of IndUS. That is less than most Light-Sport Aircraft and brings pleasant handling as I found in a short flight in the prototype Sky Skooter. I find it refreshing to see a company use a smaller powerplant and simpler aircraft. But I ask the same question as with the Skykits Savannah ADV: Is Sky Skooter a “new” model for our SLSA List?