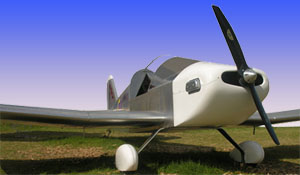 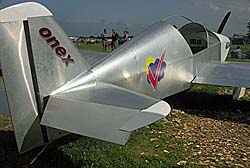 All Sonex models are all-metal designs (with some fiberglass shapes). 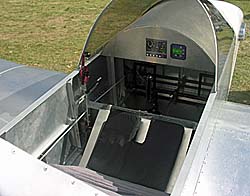 Though exceptionally low cost, you’ll probably want real instrument and not photos (the Sonex team is famous for their keen sense of humor). 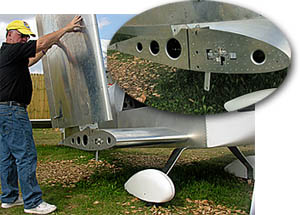 People tried to call it Oh-nex, but the giveaway is the single seat. I got it… One-ex. The clever name is adapted from the company name and one of its models, Sonex, and fits with the Waiex and Xenos. All are variations on a very successful theme (1,600 kits sold), and like the other models, Onex can be powered by the AeroVee engine. Along with a modestly priced airframe kit, the company’s own low-cost four-stroke engine helps to constrain the budget. *** A primary goal with Onex was to make ownership even more affordable, a challenge for a company that already boasts low prices. Onex is still in development so no performance numbers or costs have been finalized. But with a two-place Sonex at about $25,000 for all components including engine, Onex could be as low as $20,000, says the manufacturer. In 2010, that’s pretty amazing for an 80-hp single place that ought to perform like crazy and is suitable for most positive G aerobatics, says designer and general manager, Jeremy Monnett. *** Onex is not only inexpensive to buy, it won’t cost as much to store. With its wings folded, the Sonex team can stuff five airplanes into one T-hangar (see the diagram and more on their website). Those folded wings are eight feet wide, so it can be trailered home and it stands just seven feet tall so it’ll fit in most home car garages. *** But why go single place when most buyers seek two seats? Well, for one, Sonex observes 90% of sport flying is done solo. Plus, less material helps push the price down as low as possible. A few preliminary specs: Wing 78 square feet; empty weight 540 pounds; gross weight 850 pounds; stall 45 mph; and, never exceed 216 mph. *** As Sonex states, Onex is “Sport Pilot compatible” but you’ll need to register it Experimental Amateur Built. *** Though they’ll fly somewhat differently than Onex, you can read my review of the Waiex and Zenos that was published in Kitplanes magazine (from 2005).