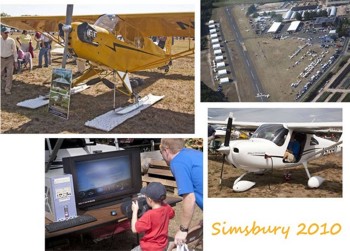 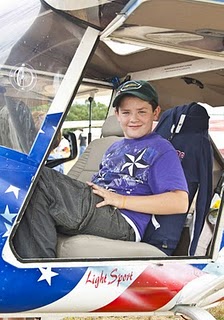 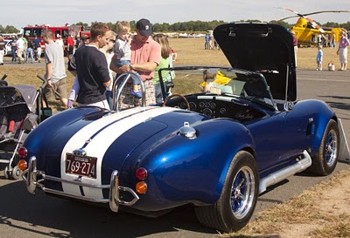 Beautiful 80 degree weather held off the looming spectre of fall and winter chills in the Northeast: perfect timing for the 25th Annual Simsbury, CT Fly-In and Car Show. *** Around 10,000 folks wound their way through the low green hills east of Hartford to attend, along with some local notables, including the original Terrafugia Transition flying car prototype (the flight test version with the canard, removed for v.2), Evektor’s SportStar Max, a Cessna SkyCatcher, EA-100 Eagle and dozens of GA airplanes and homebuilts. *** I flew a J3 Cub over the day before, then caught a hop for the show on Sunday with friends from Great Barrington Airport (GBR) in nearby Massahoosetts. *** One of the owners of GBR’s Berkshire Aviation Services, Rick Solan, (that’s his future pilot son Joe in the EA-100 Eagle) put snow skis on the Cub. Check out the cotton-ball “snow” in the ski-plane photo *** Rick’s a veteran American Airlines pilot who learned to fly — in a Cub — at Great Barrington back in the ’70s! He’s offering ski flying training in the Cub this winter. I just got my taildragger transition checkoff from Rick in one of the school’s Cubs so you know I’ll be there, learning to skip in and out of the myriad snowbound farmer’s fields this winter, because I’ve had it with not flying when the snow falls! *** Simsbury is a fun show, with airshow food stalls and vendors hawking everything from aviation-themed clothing to flight sim programs, local church groups, a rock band playing ’60s surf and car culture music of all things (did a good job, too) and even the local Congressman who gave a brief speech to the crowd in the runup to the November elections. *** And I saw more Shelby Cobras there — one of the great production cars ever built — than I’ve ever seen in one place.    *** Art Tarola, head honcho of Allentown, PA’s Abflight Sport Aviation training operation, the Evektor dealer for the Northeast, and an avid car enthusiast, remarked on all the ’60s and ’70s “muscle cars” that showed up on display: all told, I’d guess more than 300 cars showed up, from 1912 antiques to new Ferraris. *** By the way, the Cessna Skycatcher on display was the same one Alan Horowitch of Yuma, AZ won in Sporty’s Pilot Shop 2010 Sweepstakes. *** The new bird already has an interesting life, mere months after it was built (number 5 off the production line). *** As The Sun, a Yuma newspaper, reported, Horowitch didn’t even know he’d been entered in the contest — when you buy anything from Sporty’s, you’re automatically entered. *** He flew up to Cincinnati to take possession but it had an alternator problem so he returned home without the airplane. *** Soon after, he got a call from a New York doctor who offered to buy it. They made the deal and there it was at Simsbury, on display as part of a local flight training operation. Wonder where that rolling stone airplane will be in 20 years. *** Simsbury also boasted several aviation-themed talks by New England notable Lou Mancuso, who’s Mid Island Air Service on nearby Long Island, NY has two flight training operations (and several LSA). *** Doug Stewart, 2004’s CFI of the year and Terrafugia’s Richard Gersh also gave presentations. *** Lou is deeply committed to Sport Pilot training. His topic was Light Sport flying and buying tips. He’s also taking delivery soon on a beautiful amphib SeaMax, which I’m hoping to do a flight report on after trying for 18 months! *** For all you gal pilot wannabes in the region, Mid Island Air is also hosting a Females in Aviation day Oct. 2 for 8th to 10th grade girls interested in a variety of aviation careers. For information, call 631 399-0785. Women interested in presenting at the event can contact: gail@midislandair.com