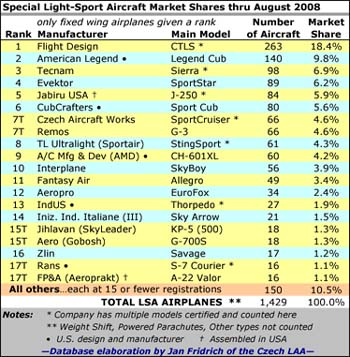 As the chart above notes, we cannot get good enough information from FAA’s database to reliably track weight shift trikes or powered parachutes…with regrets to those enthusiasts.

Reading the headlines these days shows the USA is flying through turbulence. Light-Sport Aircraft sales are suffering as are GA sales. Growth rates are off, without question, but not uniformly. We have a few companies that improved their positions in this difficult year. *** If you measure by the number of aircraft registered, top producers held on quite well, with Flight Design, Remos, Tecnam, Jabiru, Czech Aircraft Works and Legend, in order, recording the most registrations through eight months of 2008. If you measure by percentage of growth, we observe some interesting developments. But remember, those with the most total registrations are unlikely to also show the highest percentage of growth since their count on January 1, 2008. Smaller or new players logging some sales may have high percentages as they started low. *** Leading the percentage action was Urban Air, whose Lambada fleet has grown 140% (to 12). Next is an impressive performance by Remos, up 95% (to 66), followed by Jabiru, up 53% (to 84 units registered). Mixing other larger and smaller companies doing well in 2008, in order: Zlin, up 55% to 17 registrations; Czech Aircraft Works, up 47% to 66; Tecnam, up 44% to 98; Gobosh, up 38% to 18; Aeropro, up 36% to 34; AMD, up 28% to 60; CubCrafters, up 21% to 80, American Legend, up 17% to 140, and Flight Design, up 16% to 263 LSA registered.