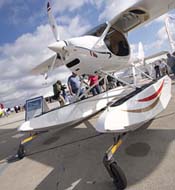 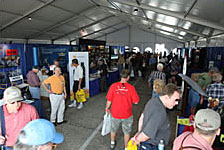 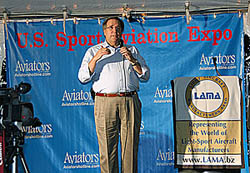 If you’ll pardon a little fun in my title, I’m pleased to offer a report from Chairman Bob Woods on the seventh running of the Sebring U.S. Sport Aviation Expo, abbreviated by many to simply Sebring LSA Expo. *** The total number of exhibitors was 147, a small decline from last year. Aircraft on display numbered approximately 135, about the same as 2010 and including some new or returning exhibitors such as Kitfox, Pipistrel, and Diamond. The Popular Rotorcraft Association had a presence this year with a promise to increase their footprint in 2012. *** Attendance was about 11,000, the same as last year (and I observe this count is larger than many other so-called “major” airshows —DJ). “Attendees were down slightly from 2009 due to extensive wintry weather up north, but Thursday was the best opening day we’ve ever had,” noted Bob. Saturday’s crowd was good, partly as Sebring offered reduced prices for Veterans. “Quite a number showed up.” *** Total aircraft operations (take off or land) was 2,538 according to official FAA records. Bob said, “This is the first year we have had an accurate count.” The busiest days were Thursday and Saturday. The count includes only those for the hours the temporary tower was in operation, thus powered parachute flights (done early and late) plus some transient traffic missed being counted. “Forum attendance also showed an increase this year,” Bob reported. *** On opening day Thursday evening the LAMA Dinner filled the big hospitality tent, supported by AeroShell, to hear AOPA president Craig Fuller address the SRO crowd (AOPA event videos here). Parlaying this success, LAMA plans another major speaker for the 2012 event. *** So when will the eighth annual running of the Sebring show occur? According to Bob, “Our 2012 dates are not yet set. I try to wait until I can get a fix on raceway activities before announcing. That normally happens just before Oshkosh.” So stay tuned. We also show the dates in the left column of this website.