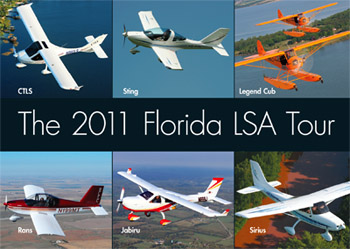 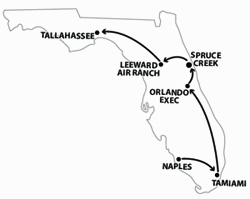 Every now and then the marketing geniuses in Light-Sport aviation have an exceptionally good idea. Here’s one of them. Initially organized by SportairUSA’s Bill Canino and now-American Legend marketer Dave Graham (formerly of Gobosh), a flock of planes including five of the most popular brand names will set off for Sebring-After-Sebring… or what they are calling The 2011 Florida LSA Tour. *** “We’re in Florida already and we have to fly home through the state after Sebring ends,” explained Canino. “Since everyone can’t come to Sebring, we thought we’d take the show to them.” *** Bill and Dave established a strategically-planned series of stops, contacted EAA chapters at several locations and asked them for an invitation, and offered them a cash incentive to assist with pulling out the members for the date of arrival. I hope this works well as it’s a grand idea in the LSA tradition of open and friendly competition. *** Each day, the Florida LSA Tour will show their birds from 10 AM to 3 PM. Their schedule appears below with contact info. *** The tour includes these brands and models: SportairUSA‘s Sting, Sirius, and iCub; American Legend’s Cub, Flight Design’s CTLS, Rans’ S-19, and JabiruUSA’s J-230 (represented by Sportplanes Florida). It could be more than these as other brands were cordially invited. One of the greatest aspects I’ve noticed in my work to assist the LSA industry is a willingness to cooperatively market… to sit wingtip-to-wingtip on a ramp and show many handsome flying machines. Each representative is well aware a customer may be attracted to the other rep’s aircraft but this also works both ways. And having a whole flock of shiny new LSA is a proven way to attract more interest (much like the popular LSA Malls). Other companies have done tours; nothing brand-new in that effort. But I can’t name another effort where a group of airplane sellers worked together and invited along even more companies. *** I hope the EAA chapters turn out well for the gatherings. I know I’ll be at the stop at my home airport (Spruce Creek Fly-in). Go Tour!