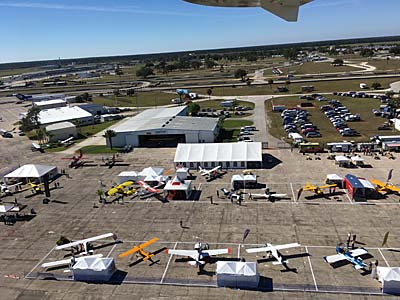 “We had a lot of interest in Elf,” said Don Reece, the man behind Apogee A.C.E., the Florida dealer for Ekolot. Indeed, though even smaller and tucked behind Ekolot’s better known Topaz, Elf caught the attention of Videoman Dave and I as we scoured the Sebring exhibit grounds looking to shoot video of any aircraft or development of interest. We get to do this at many shows so catching our attention means something. (Watch for an upcoming video on Elf after editing is complete.)

Ekolot Elf — It looks small and is physically smaller because Elf seats comfortably (but narrowly) a single occupant. It read “Light-Sport” on the outside but it has not completed the proof of compliance as of Sebring 2017. However, that’s the plan after an FAA regional office told importer Krzysztof “Kris” Siuba that Elf was too fast for Part 103 and any attempt to remedy that would be fruitless so it could not qualify for FAA’s simplest, least regulated category. 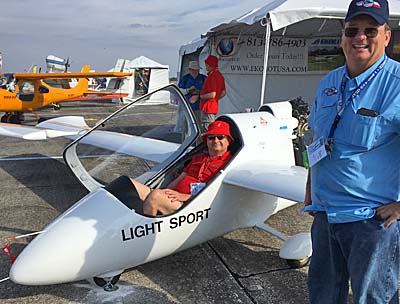 While Elf is capable of speeds close to 80 mph, the factory lists cruise at 71.5 mph (62 knots) which is not much above the Part 103 speed limit of 63 mph — or, per regulation, 55 knots. The Polish producer intended Elf to fit in Europe’s fairly new 120 kg class (120 kilograms is 264 pounds, not much above Part 103’s 254 pounds, though trimming weight when an aircraft is already this light could prove challenging). Because the Elf at Sebring had a parachute system it could weigh 278 pounds but the speed problem remains.

As Ekolot has already achieved SLSA approval for their two seat Topaz, they should be experienced in proving compliance. Once Elf has earned a Special Airworthiness certificate, the aircraft can use its full speed potential and could add pounds while easily staying inside LSA parameters.

Controlling Elf is common with center-mounted joystick and dual rudder pedals. The nose wheel is steerable and features a hydraulic brake. Dual main gear use composite suspension; the gear width is rather narrow but while permitting regular ramp operations, keeps the gear closer to the fuselage adds to the general smoothness of the design. The only unusual control is a right-shoulder-mounted braking handle for the prop. 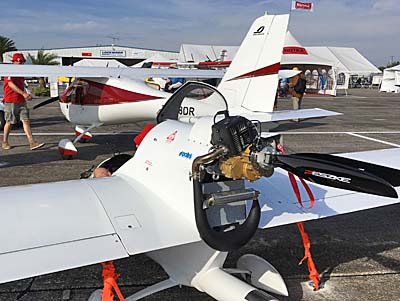 Ekolot’s JK-01Elf uses a single cylinder engine with folding prop, which itself is sophisticated with a small disc brake to slow the prop allowing it to fold back on hinges. When restarting after soaring as long as you wish, the blades will swing out and forward as motion develops lift. The electric-starting Polini Motori Thor 200 two stroke one cylinder air cooled engine offers max power of 26 horsepower at 7000 rpm. Elf is sleek enough and light enough that 26 horsepower is sufficient, said Kris. On board fuel is about 4.5 gallons. Under high power that won’t last too long but this slippery airplane is meant to be flown with engine off or at low power so that represents plenty of fuel.

Electric propulsion enthusiasts will be interested to hear Elf is being fitted with a Geiger electric drive. Check with Kris or Don to hear about availability of and prices for a gas or electric powered Elf.