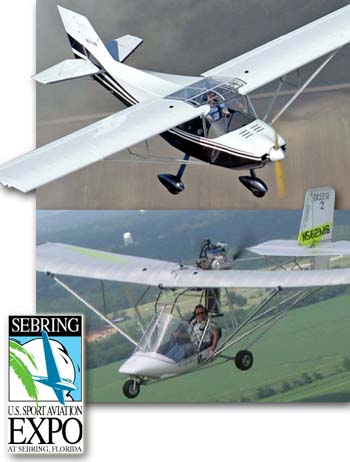 After three days of Sebring 2009, the upbeat mood has mushroomed. I heard zero negative comments and dozens of positive statements defining the Fifth Annual Sebring Expo as an unqualified success. As cleverly keyboarded by aviation writer, Jim Lawrence (LSA Editor for Plane & Pilot magazine — read his blog on Sebring): “Take that, bad economy!” *** EAA Editor Mary Jones and I compared notes to count 14 reported airplane sales in three days. Such good results show buyers are indeed in the market. In addition to the best Thursday ever, Friday was the “best day ever for Sebring”, said Expo Chairman, Bob Wood. *** At the show, I was pleased to find two new all-American aircraft to add to our SLSA list, now 91 models long. Welcome to M-Squared’s Breese 2 and RANS’s S-6 Coyote. The Breese won approval last summer and has been overlooked by the media… a mistake as the Alabama manufacturer offers the fully built two seater for just $34,995. The Coyote is one of America’s top-selling kit-built planes (approaching 2,000 flying) and it, too, is now available ready-to-fly. The S-6 is RANS’s third approval under SLSA rules, joining the S-7 Courier and S-19LS.