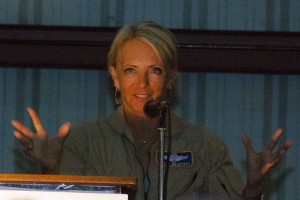 Patty Wagstaff, certainly the preeminent woman pilot in the world, spun her spell over a full hangar at the Heartland EAA Chapter 1240 "Dinner with Patty Wagstaff". As knockout lovely as ever, she's as hot an aerobat as ever too. Her tales of growing up in Alaska, learning to fly, and not letting anything get in the way of her determination to become a top airshow pilot held the audience in thrall. More on her comments to come, she's quite a charming and down-to-earth speaker. 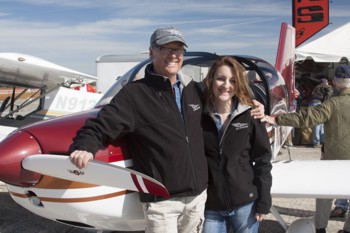 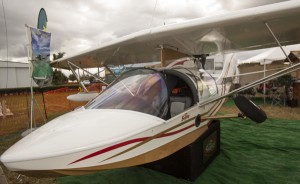 Adam Yang, new partner and CEO of Progressive Aerodyne, showed off the company's newly certified SeaRey amphibian SLSA. He'll be flying it over to the Bahamas as part of the LSA flyout at the end of the show on Sunday. We'll be getting together for some flying and photography for an upcoming article I'm doing on water flying in the islands…stay tuned. 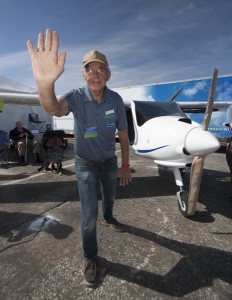 At the Pipistrel booth, Greg Lawrence, a hearing-challenged flight instructor who has worked hard for a long time to bring flight instruction to deaf students, took me through a demonstration of his belief that the same tenets of Taoist Tai Chi, a Chinese martial art practiced for both defense training and health benefits, can be applied to flight instruction. "There are so many parallels between Tai Chi and learning to fly. I've developed lesson plans to teach the deaf student pilot without oral communication in the cockpit. Tai Chi is taught the same way, by demonstration, then repetition by the student , then correcting errors." There's a lot more to this than I've got room for here but it's an intriguing thought and I'll bring you more on it soon…it's worth thinking about and not only for deaf students. 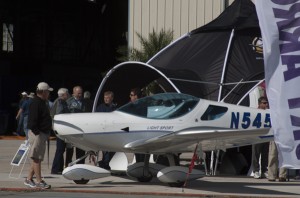 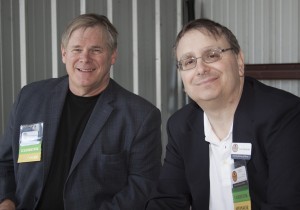 Rick Matthews, left and Len Assante, President and VP Communications respectively of Aviation Access gave a detailed briefing on their shared ownership program that draws from other fractional programs including NetJets but blends in a social experience not unlike the European Club concept which is highly popular over the pond. I'm doing a column on this because it hits right in the wheelhouse of one of my pet themes: we need to get real about the high costs of flying even LSA and realize we need to form community to keep aviation alive. The core of the Aviation Access Project is to bring 1/4, 1/8 and 1/16 share ownership that includes management, hangaring, insurance, maintenance, engine replacement and more to partner/owners as part of an LLC corporation structure. Maximum hours per year vary according to the size of the share, from 35 to 150 hours per year. Share purchases run from $11,600 to $42,300 and monthly maintenance fees range from $110 to $310. And that's all inclusive. Much more about this new program in my column soon, but it's a compelling and appealing concept (and not just for LSA either) that might blend that just could be the missing link in getting people back into an ownership role with aircraft.

More airplanes made it through the winter weather blanketing much of the midwest and east. *** Pipistrel’s much-awaited Alpha Trainer arrived at 8 last night thanks to its much-fatigued pilot Don Sharp who soldiered on through the crud all the way from Indiana. *** Highlights? Too many to list, but in the wee hours meself we’ll go the photo/caption route. *** Personal fave: Patty Wagstaff’s always-amazing airshow…in the near-dark twilight, followed by the largest demonstration team in aviation , Team AeroDynamix. The 12-aircraft team is made up exclusively of Van’s RV aircraft, including RV-4s and RV-6s, two of the most popular kit planes ever. The complex and highly entertaining show lit up the darkening, overcast skies with great moves and lots of bright lights. *** Attendance seemed light today, disappointing especially with all the effort Jana Filip and crew have put in this last year to promote the show and bring in acts like Patty and the RV team. It was cold, for Florida (below 60 in the morning) and windy all day, but beautiful. Many dealers made demo flights (great way to show how your plane handles crosswinds, right guys?) and those that came were treated to LSA’s top show. *** *** *** *** *** *** *** *** *** *** ***