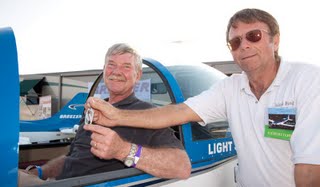 Breezer dealer Mike Zidziunas had a double-good day. *** First, a potential buyer he’d been working with whipped out a blank check and said, “How much do I fill it in for?” *** Congratulations Mike! *** He also announced the German company has named him sole U.S. Distributor for the Breezer II, which he’ll take over from Sportsplanes.com. He’ll do business as Breezer Aircraft U.S.A. *** Owner Dirk Ketelsen and marketing rep Wolfgang Nitschmann joined the celebration and lauded Mike’s deep background in LSA engine repair and maintenance, flight training, and assembly/final test flying of imported aircraft.