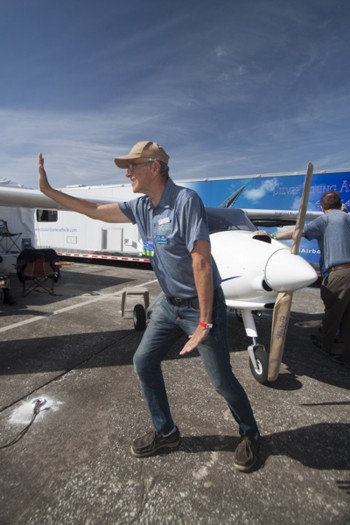 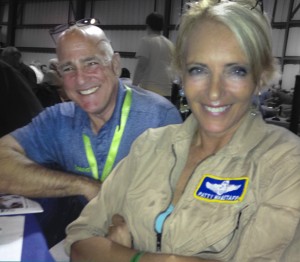 Tired as she was after doing her crackerjack performance, Patty Wagstaff graciously let me take a quick iPhone snap of her and Pipistrel Florida dealer Rand Vollmer. Apologies to Patty, it doesn’t do her beauty justice, but her warmth and good nature shine through for sure. A couple excerpts from her comments to the dinner guests last night. Her first flight was in a Cessna 206 in Alaska. It was fully loaded, the turf runway at an Inuit village she was helping aid was soggy, yet the pilot chose to launch without using the full runway. The airplane failed to achieve flight before achieving the end of the runway. “I’d been around airplanes with my father, so I knew not using the whole runway was a bad idea. We were suddenly upside down, fuel dripping, my knees were shaking. I decided right there I was going to learn to fly. I thought, ‘I can do better than this guy any day!'” Although there was no CFI in her town in Alaska, she talked a pilot into teaching her, after he tasked her with finding a plane. She went all over the airport, found a Cherokee 140 owner willing to loan her the plane, and she was off towards a brilliant career. Now, reflecting back on her amazing 32 years of aviation accomplishments, she says her instructor liked to say “She bugged the hell out of me!” And she adds, “It all seems to have gone so fast. I’m glad I learned to be persistent at an early time in my life.” About flight training, she advises: “Find a CFI you like with a personality that works with yours. It’s like a date: you want to get along with each other.” 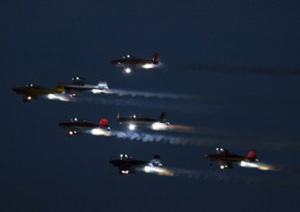 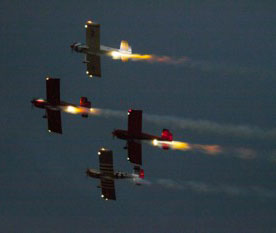 Team Aerodynamix put on a great show with spectacular lighting (that made them appear jet powered) and their formations were grouped so the fleet appeared to be aircraft like a jetliner or a Rutan Long EZ. Brilliant … literally!

Just after I posted in the wee hours last night I got this late email from Greg Lawrence about his work with deaf flight students. Greg added a link to more information, check it out, it’s very interesting.

“Nobody can hear very well in a small aircraft,” writes Greg, “and fewer than ‘nobody’ can process language and learn well while sweating and worrying that they are going to screw up and maybe die. That is why I developed lesson plans for teaching Deaf to fly that require no oral communication in the cockpit. Tai Chi is also taught and learned with minimal talking. There are many similarities in teaching Tai Chi and flying. Tai Chi has been taught a couple thousand years longer than flying. Stop by the Pipistrel display and I will demonstrate. I am an Advanced Ground Instructor and we will be standing on the ground so we will be legal. But, you already know how to fly, so I will teach you the first three moves of the taichiquan. A piece on Tai Chi will attract a lot of attention in China.”

Could Tai Chi Flight Schools in the Orient be the next boom overseas?

Also wanted to share a few shots of the Team Aerodynamix show.