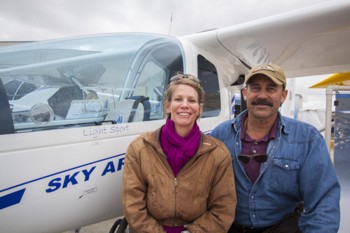 Her name is Stephany Glassing, she is a licensed Sport Pilot thanks to an Able Flight flight training scholarship, and, oh yes, she lost the use of her legs in a car accident more than 20 years ago at the tender age of 19. Even then she had set a world record for water ski jumping, helped by her coach Mark Mosley seen with her in front of the Sky Arrow S-LSA she trained in. Her story of persistence and incredible determination in the face of a series of major health challenges long after her accident is a stirring one that you won't want to miss. I'll bring it to you in a column soon. 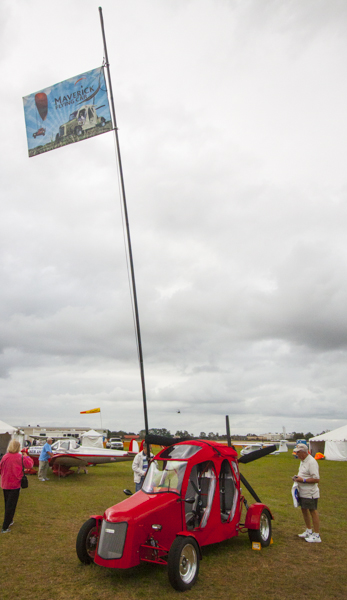 The much-refined production Maverick is a true flying car. A licensed public road vehicle (as a kit car) in most states, this little puppy has a lot going for it, including 0-60 in 3.9 sec., a 190 hp, fuel injected Subaru engine, FAA certificated as an ELSA (kit built) or Experimental Amateur Built flying car – yes, flying car – and a dual drive setup: prop for flying, transaxle for road work. It's a real dune buggy too, carries a useful load up to 450 lbs., drives at a top speed of 100 mph, flies under its parasail canopy (the mast keeps it off the ground for easy launches) at 40 mph, and it flies like a car: turn the wheel left to go left, chop the throttle to land and that's about it. $93,000. And you can buy one now. 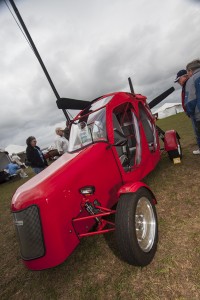 And now for something completely different…The Maverick. Read all about it at www.mavericklsa.com 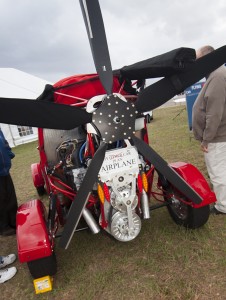 The big Saturday came and went, bookended by winds, overcast and raindrops of the intermittent kind. No doubt many potential showgoers were deterred by the non-Florida-like weather.

LSA demo flights were conducted apace, although none of the three days of the show have shown the kind of flight activity of previous years because the weather just hasn’t been cooperative.

All in all, a difficult show to accept: so much great preparation from Jana Filip and crew, many LSA exhibitors battling through winter weather across the country just to arrive late, Patty Wagstaff doing two blockbuster performances, ditto Team AeroDynamix, which drew out a good crowd at dusk despite challenging weather that wasn’t horrible, just uncooperative, and sometimes you want to ask yourself if somebody up there likes to laugh when people plan an aviation meet.

In the hang gliding days, we called it “meet weather”. Call a competition, expect rain.

Final day tomorrow typically draws a smaller attendance at least on a Sunday morning, and a bunch of us are launching at show’s end for 4 days in the Bahamas as part of Mike Z’s annual island fly-out. Skies are clear as of 11:30 tonight: fingers crossed as we tuck in to bed, hoping to make up in one morning what we haven’t been able to do for most of the show: photograph and shoot airplanes for pilot reports. More on that later.

Two in the can so far: Tecnam P92-TD (Tail Dragger), a solid, comfortable flyer, and the Pipistrel Sinus motorglider, which I put 5 hours in with Florida dealer Rand Vollmer before the show and even soared in light conditions for half an hour with engine off.

Up tomorrow morning: the RV-12 SLSA which I’ve been itching to fly for some time. Then off to Freeport, Grand Bahama and some hijinks with amphibs and float planes, including the CTLS on amphib floats, which I’ve flown before and will do a full report on.

Meanwhile some quick snaps with stories to follow tomorrow night from, we hope, Freeport.