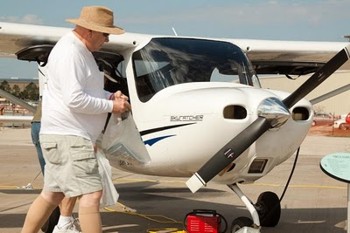 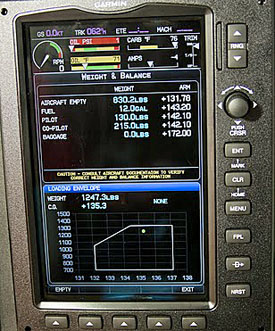 Garmin G300 display has this page that lets you do instant weight and balance calculations. Just input the values in the top of the screen, and the little dot tells you whether you’re good to go… or not.

The Garmin G300 easily lets you input pilot and passenger weights and fuel quantity. If you’re in the weight and balance limits, you instantly see the green dot, left. Too much weight in any category gives you a clear warning.

Cessna’s Skycatcher program is really gaining traction. I had a fun chat with Julie Filucci, Mgr of Cessna Pilot Centers (an excellent formation stick too — she flew for my Cessna shoot a year ago). *** Matt Tutton, an Orlando Cessna dealer, and Bob Stangarone, Cessna’s VP of Corp. Communications also weighed in the haps in Wichita. *** By the end of 2010, 30 Skycatchers had been delivered, mostly to flight schools across the U.S. *** “We expect to deliver 150 more by the end of this year,” says Bob, “and more than that in 2012, although we don’t have an exact number yet.” *** Cessna’s working tirelessly working away at that backlog that initially climbed to 1000 orders when the scratch-built LSA was first announced a few years back. *** Both Julie and Matt Tutton had recent long XC trips with the Skycatcher. Julie’s reached out to Oshkosh from Wichita, while Matt’s went southeast from Wichita to Orlando. *** “I did some low and slow flying,” says Matt, “and it trims up so nicely; with half flaps I was loping along at 45 to 50 knots, going around and taking pictures. The visibility in the Skycatcher is incredible. Just keep a micro fiber cloth with you to keep the window clean for photos and most of the time reflections aren’t a problem.” I’d imagine that high wing helps a lot too. *** “With the Garmin G300 on board,” Julie said as she demonstrated a really cool feature of the proprietary EFIS (based on Garmin’s terrific 696, 7″ display), “you’ve got everything you need: Airport Information Manuals, weight and balance automatic calculator and a lot more.” *** Weight and balance can be tricky with LSA due to the upper weight limit of the category. *** “With the G300’s calculator, feature” says Julie, “two heavy passengers can automatically dial in the numbers and instantly see whether they’re in the box (see photos below).” *** Since useful load on the Skycatcher is listed at 490 lbs. and can be less than that with options such as wheelpants, a second MFD etc., keeping track of weight is important. *** “Most training operations are an hour to an hour and a half though,” said Bob, “so even with two heavy pilots, they can carry enough fuel for at least a couple hours plus reserve.” *** Perhaps the biggest weight factor in Skycatcher orders has been the optional airframe parachute. *** “No one’s ordered one yet,” Bob said. “It adds 38 lbs. As a former flight instructor, I prefer students not have that ease of getting out of a tough situation; sometimes you need to sweat your way out of it. That’s the logic I think why there have been no takers so far.” *** He adds that the system can add extra peace of mind, especially for spouses. My argument in favor of ‘chutes continues to be that there is likely to be no pilot skill-centric option after a bird strike, pilot incapacitation or mid-air collision. *** Which makes the upper weight limit of the LSA category problematical. I wish there was a weight allowance for parachutes, just as there is for water operation equipment (raises the limit from 1320 lbs. to 1430 lbs.) Surely FAA and ASTM aren’t saying water operations are more important than survival after a major mishap. *** Julie also filled me in on the soon-to-be-released Sport Pilot training course, currently available through Cessna Pilot Centers and translating to an online course. The new course, due to be finalized within the next couple months, has tons of video shot by the King School. *** “John and Martha King show students exactly what procedures look like from the cockpit point of view. They had the airplane for three months for filming. The program, based on the FITS training principles, gives you a feel for what you’ll do before you even go out to airport.”  *** I’ll go through the program once it’s released and do a story on it.