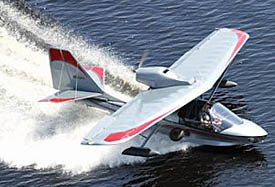 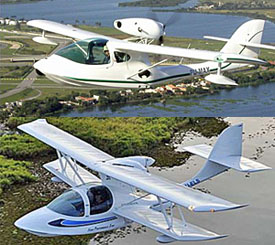 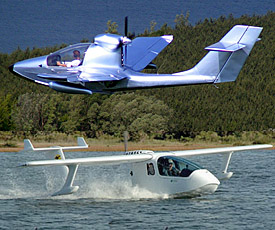 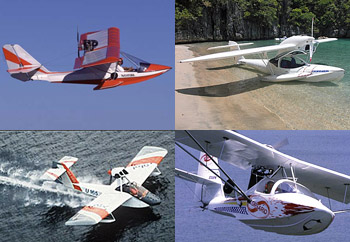 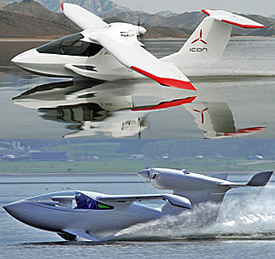 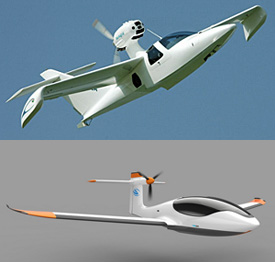 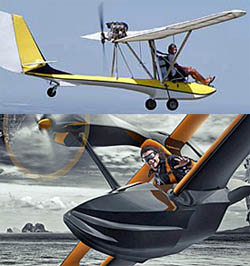 Once upon a time, in the early days of Light-Sport Aircraft, way back in 2006 and 2007, new LSA models were being introduced at the torrid pace of two, three, even four per month. Aviation had no prior design outpouring to compare. The rate of development had to slow — such a pace is not sustainable — and it did. Yet the young industry continued on to the astonishing sum of 131 models and it ain’t over yet. Meanwhile, though, a new tsunami is building within the LSA sector. I’ve written about a wave a new seaplanes and as summer 2013 approaches, a tour of the many choices may help guide interest of seaplane enthusiasts.

Current Seaplanes (distinguished from float-equipped land planes *) include FAA-accepted SLSA models: Mermaid, SeaMax, SeaRey, and Freedom. At present all are being offered and have some measure of U.S. representation. •• SeaMax has a few examples flying in America and a new American representative while SeaRey has a large fleet of more than 500 built from kits. SeaRey manufacturer Progressive Aerodyne, which celebrated 20 years in business, is now embarking to build ready-to-fly models fulfilling pent-up demand. Mermaid is again being manufactured in China under the new brand name Triton but under the management and direction of Chip Erwin, the design’s original developer. Freedom has new representation and will be based at the Lakeland airport, the home of Sun ‘n Fun. All except Mermaid should be available at that airshow.

Current Flying Kit Models that are operating in the Experimental classification include: Aventura, Super Petrel LS, Dornier’s S-Ray 007, the Finnish Atol Amphibian, Brazil’s Microleve Corsario, the composite pusher WQS Seagle (though this company appears to have dropped off the ‘Net), and the weight shift Ramphos Flying Boat (though this model which entered into an early China connection has apparently gone dark). •• Of these, the American Aventura from Aero Adventures has new ownership. The company is well established in Florida and new management is providing new energy. In addition to the two seat Aventura II, new boss Alex Rolinski plans to reintroduce the Part 103-capable Aventura I.

Aventura models are expected to be on display at Sun ‘n Fun. Super Petrel LS will also attend Sun ‘n Fun. Built by Edra Aeronautica and with U.S. representation, Super Petrel is expected to achieve SLSA status as ASTM standards are also accepted in its home country of Brazil. The designer, Rodrigo Scoda, will be piloting for demonstration flights. I judge the three other models remain in the unlikely category for American sales anytime soon … but you never know in the always-changing world of Light-Sport and kit aircraft Sport Pilots may fly.

Announced and Promoted Models in planning represent some of the most impressive developments among light seaplanes including: Icon’s A5, Lisa’s Akoya (see “Update” below about company officials’ work to secure funding), the made-for-electric-power Equator Excursion, Europe’s FlyWhale. Regretfully, none are expected at Sun ‘n Fun. •• Of these four high-end products, Icon is the only one nearing production. The company is well known, has generated a reported 1,050 delivery position orders and has entered into production agreements with Cirrus Design, manufacturer of the SR20, SR22, and VisionJet general aviation aircraft. Icon has been several years in development and only exhibits aircraft at the AirVenture Oshkosh event, however, it appears well funded and a limited number of aircraft are expected to fill the first orders later this year. Icon has requested a weight increase exemption with FAA but no announcements have been issued on this request.

Part 103 Seaplanes … Yes, the original ultralight vehicles remain alive and well 30 years after FAA created the category. Two place ultralights were merged into the Light-Sport sector as “converted ELSA,” but the single place models continue on as once conceived. We even found entries in the Part 103 class of genuine ultralight seaplanes including: Europe’s FlyNano and the “flying float” Connie. The latter is a fascinating design that uses a single float from a heavier aircraft as its hull but it was never put into active production. The former continues development though flight trials have not begun at this writing. FlyNano was originally announced for electric power. An ultralight seaplane was allowed extra weight so can have an empty weight of 304 pounds or 328 with an airframe parachute.

Models in Development include: at least three more aircraft that I promised not to leak before their producers announced them. In two of the three cases I have seen extensive work to the goal; one is limited to a verbal presentation. Of the serious efforts one is extraordinarily versatile and will even take on the Icon A5 development for sheer panache. Additionally, the marketing may be as clever as the design. More as it becomes public knowledge.

All together, then, light aircraft fans have a rather amazing 20 seaplanes to excite them and that’s without even considering many models of floatplanes. I’m nearly certain to have missed even more. The history of seaplanes of all sizes is nothing short of phenomenal but focusing only on modern two-place light seaplanes, we still have an impressive list. •• From 20 models we’ve identified here, nine are viable products you can consider buying. A few more are only questionable for their American representation. Only three or four appear to be stalled projects, itself a fairly remarkable statement. You have to love what FAA set in motion with an industry-led certification scheme because arguably its most noticeable success is a massive proliferation of products. No wonder the Type Certified manufacturers have pushed for — and are getting — some of this same flexibility. Pilots … celebrate your many flying choices!

UPDATE 2/23/13 — Our friends at AvWeb have uncovered more about the Lisa Akoya seaplane, with an article speaking to yet another Chinese acquisition of an airplane company. It appears the shapely Akoya will join the party in China, a country that has recently absorbed companies like Continental, Cirrus, and others. According to French and Chinese online sources, production will remain in France. Read the original AvWeb article.

* A seaplane is generally defined as an aircraft with a boat hull — colloquially a “flying boat” — where a floatplane is a wheeled aircraft fitted with straight, non-amphibious or amphibious floats.