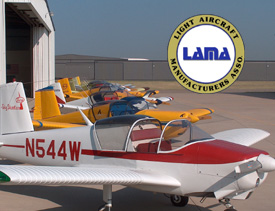 IndUS Aviation builds the Continental-powered T-211 and the Jabiru-powered Thorpedo at Dallas Executive Airport. The company is also active in establishing LSA in India (hence their name, Ind-US).

Some folks wonder about the new Statement of Compliance to ASTM standards. Is this a true certification system? FAA doesn’t do the certification, so how do we know it means anything? Good questions. A manufacturer certifies their airplane. A Designated Airworthiness Rep (DAR) examines it. Companies behind each approved SLSA (now 38 aircraft) must also do an annual internal audit. Now industry association LAMA has started promoting voluntary independent audits, to be certain a design has met and still meets ASTM standards. The first of these was performed and today LAMA was advised that IndUS Aviation, maker of the Thorp T-211 and Thorpedo, successfully completed the first external audit of a LSA builder. LAMA president Tom Gunnarson called IndUS, “an accredited company.” Such third-party audits — plus a proposed decal applied to every aircraft showing successful completion — is likely to win support from EAA, AOPA, insurance companies, FAA, and NTSB. Buyers may soon learn to look for the “Seal of Approval.”