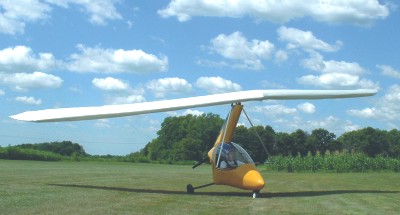 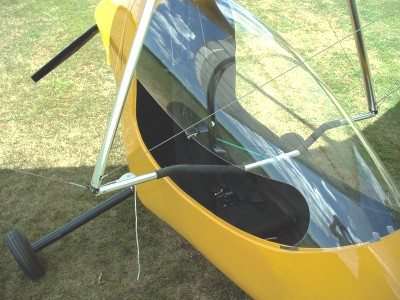 The opening left in the glider’s sleek canopy will be closed with a sheet of Neoprene slit from front to rear to allow full motion of the control bar if needed. 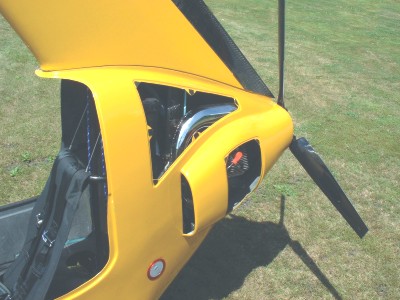 The Escape Pod’s 25-hp Cors-Air M-21Y engine is tucked neatly away, out of the airstream. Located in front of the engine is the Pod’s rocket-deployed emergency parachute system. 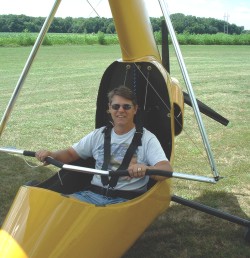 Michael Riggs, owner of Seagull Aerosports and developer of the Escape Pod, is all smiles in his new creation.

Like most trikes, the Escape Pod can be broken down small enough for storage in your garage or in the corner of your hangar. Its light weight will allow loading to trailer or pickup.

Seagull Aerosports takes a new angle on weight-shift construction with a fully enclosed cockpit.
Developer Michael Riggs might prefer I called his Escape Pod something other than Everyman’s Motorglider, but if you have any interest in self-launched soaring flight, Riggs’ invention is one of the most cost-efficient purchases you can make. The Escape Pod costs thousands less than ultralight motorgliders and literally hundreds of thousands less than sailplane motorgliders.
Oh, and one more thing this kind of flying machine is a hoot to fly. That the Escape Pod also transports easily, can be stored in a small space and is attractively shaped are icing on the cake.
Sure, it’s obvious-I like the Escape Pod. But could it be for you, too? Even if this aircraft isn’t your type, you might enjoy reading about how thoughtfully it was designed.
Trike Motorgliders
Before the Sport Pilot/Light-Sport Aircraft (LSA) rule was recently passed, trike enthusiasts had several other ways to fly such aircraft. One method, called Glider-Trike, allowed private pilots to operate a fully assembled trike ultralight as a motorglider without the restrictions associated with two-seat ultralight trainers. As with hot-air balloons, motorgliders avoid hassles with medicals as neither requires a visit to your doctor.

You can still fly under Glider-Trike. Or, you can still build certain Experimental/Amateur-Built trikes that have been approved under the 51% rule. And before long, approvals will start flowing and many LSA trikes will hit the market. Before that day, however, you can fly under FAR Part 103, which did not change with the issuance of the new LSA rule.
Seagull Aerosports, Riggs’ company, will fully build the Escape Pod and its unpowered sibling, the Pod Racer. Since empty weight is well under Part 103’s 254-pound limit, ready-to-fly construction is completely proper and gets you in the air sooner.
Pod ConstructionThe fuselage, or “pod,” is made from composite foam sandwich construction of PVC and graphite prepreg materials. The shape is vacuum-bag molded and oven cured for minimum weight and maximum strength. The complete lower shell and main structural bulkhead weigh only 16 pounds out of the mold, and the entire trike chassis weighs less than 80 pounds with engine and parachute.
The tricycle gear is fully retractable, which is allowed under Part 103 though not for LSA. Maingear legs are made of a filament wound graphite, and the gear is retracted using racing catamaran hardware.

Most trikes have a forward support tube that obstructs visibility somewhat and complicates the addition of a full enclosure on these weight-shift machines. Abandoning the forward tube, the Escape Pod uses a streamlined, tapered composite mast that has enough vertical area to provide yaw stability for high performance hang glider wings. (Modern hang glider wings attain glide ratios beyond 15:1.)
The Pod has been designed for full enclosure in a molded acrylic canopy with graphite frames. For summer use or if customers prefer, a shorter summer windscreen will also be available. To further boost cleanliness-and therefore performance-the fuel tanks are mounted internally and the engine is fully enclosed, unlike most ultralight designs.
But how do you fully enclose a weight-shift aircraft? While control movements on a trike are minimal in normal flight conditions, there are situations (landing approach in rough conditions, for example) when the pilot must make movements wider than the canopy. To facilitate this need, the triangular control bar passes through a Neoprene-covered slot running fore to aft in the canopy following the control bar’s arc, thus accommodating a full range of motion.
The Escape Pod is powered by a 25-hp Cors-Air M-21Y and Powerfin three-blade propeller. An unpowered variation, called the Pod Racer, is also available and is launched via a winch or aerotow. Seagull Aerosports expects to see Pod Racers in wide use at hang glider airparks that provide ultralights to tow hang gliders aloft just as sailplanes do.
Safety First

A designer and builder of hang gliders for many years, Riggs always puts safety first when it comes to his Pod designs. The bottom of the fuselage is flat so that if an outlanding is necessary and terrain does not encourage use of the gear, a belly landing can be made. In addition, the shape of the nose will prevent shoveling and possible flipover. A foam crush zone forward of and under the pilot adds another layer of protection as does a four-point seat restraint system.
Not only is the engine inside the pod, but a rocket-deployed parachute is mounted on the rear of the main structural bulkhead and fires through a hatch on the side. Except for the handle on the floor between the pilot’s legs (and emergency responder labels), no one will know such an emergency parachute has been installed.
Either the powered Escape Pod or unpowered Pod Racer can be used with any hang glider wing that will accommodate the weight of chassis, pilot, engine, fuel and parachute system. This will not be a challenge given the wide variety of wings available for all skill levels.
What’s Next?
When I spoke with Riggs at Oshkosh, he anticipated that the Escape Pod would fly by the fall of 2004 and planned to attend the U.S. Sport Expo in Sebring, Florida, in late October. Three Florida hang gliding airparks launch unpowered flyers aloft by ultralight tug, and Riggs thinks their customers should love the concept of the high performance Escape Pod and the unpowered Pod Racer variation. And older hang glider pilots may be a market, as they’ll be able to fly in sit-down comfort.

Visit Seagull Aerosports’ web site to see more photos and an entire study of the project. This material wasn’t posted at press time, but I’ve seen the development stages and think the Artist’s Study series of drawings and early fabrications will be of interest to anyone who’s ever built or designed an aircraft.
Both Pod versions will be sold through an existing hang glider dealer network. These dealers will be able to perform initial setup, check flights and provide flight instruction as required. Pilots who already own a wing that meets the structural and size requirements may purchase the Pod without a wing.
Prices are not yet finalized, but one thing looks sure: Riggs’ dual-variation Pod series should amply satisfy lots of pilots interested in light aircraft or soaring flight.
FOR MORE INFORMATION, contact Seagull Aerosports at 952/473-1480 or visit www.fly-seagull.com.