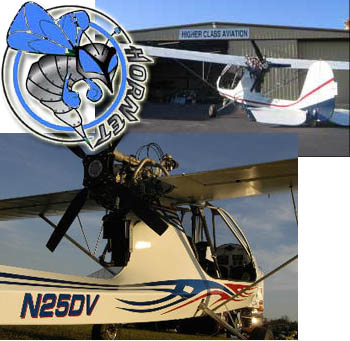 Skies don’t look so blue and beautiful while fires ravage the landscape near San Diego. Ramona Airport-based Higher Class, builder of the Sport Hornet, has been spared damage but other airports appear less fortunate.

Reporting from right in the middle of the firestorm, Higher Class Aviation owner Robert Gaither called to say, “We’re OK!” His Ramona Airport operation building the Sport Hornet benefits from being on station with fire fighting aircaft. More-than-willing pilots of those aircraft have been grounded by high winds. Meanwhile, ground-based firemen know they need to preserve those aircraft so they’re sheltering the airport. “The only way this fire will be stopped is by the ocean or by fire fighting aircraft,” said Robert. *** He heard from numerous friends that Nichol’s Field, near Otay and the Mexican border is severely threatened. One pilot fears they may lose the entire airport and its fleet of some 50 ultralights. “It’s like a war zone out here,” Robert reported by cell phone. But he also observed the flying community is banding together. “My customers have called me to ask if we are alright and to offer their support. One Hornet owner offered his hangar to save my airplanes.” Some 1,000 homes have been lost and more than 200,000 acres have burned.