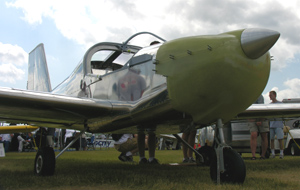 Using their characteristic low-key approach (unlike Cessna’s splashy introduction) Van’s Aircraft revealed their prototype RV-12 at AirVenture 2006. I spoke with legendary designer Dick van Grunsven about his new model to hear it shares some characteristics with sailplanes: quickly removable wings are modeled on a glider-type spar pin system, and full-span ailerons (which help simplify the wing removal). RV-12 also sports a large volume tail, much bigger than the tiny tail feathers of the Cessna LSA POC, with an all-flying stabilator. “We hope to fly this prototype in September or October…and kits should ship in late 2007.” Dick added that he plans to evaluate selling fly-away models; doing so would represent quite a shift for the big kit supplier. *** So now we LSA enthusiasts find ourselves with no less than 38 certified aircraft soon to be joined by the world’s largest airplane builder and the world’s largest kit builder. No one doubts anymore that Light-Sport Aircraft have arrived.