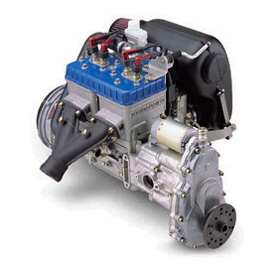 Once the largest selling engine in the Rotax line of engines, the Rotax 582 sold hot and heavy for powered parachutes but also to many fixed-wing ultralights. It’s approval may open the door to more American SLSA.

Perhaps a long time coming Austria-based Rotax recently certified the 65-horsepower R-582 two-stroke engine under ASTM standards. Now, some American designs may proceed with pursuing their Special Light-Sport Aircraft approval. One that pops into my mind immediately is Quicksilver‘s already-certified GT500 (under Primary Catetory from the mid-1990s) but many more could be close behind…for example, powered parachutes and other popular American ultralights. While most SLSA are hitting the gross weight limit of 1,320 pounds, LSA aren’t required to be that heavy so the 65-horse engine could be a most appropriate powerplant. One interesting note is that if A&Ps currently resist working on the 912 series what will they think of two-stroke engines? A swing factor could be Cessna, should the big company choose the lightweight 9-series Rotax over a Lycoming (part of Cessna’s corporate family). If Cessna goes Rotax, then the door may open to mechanic acceptance. As with so much in SP/LSA, time will tell.