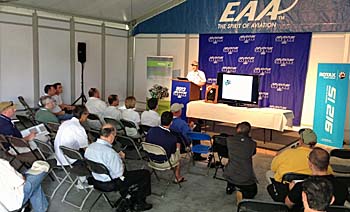 Rotax BRP presented 912 iS facts and info at their AirVenture 2013 press conference. 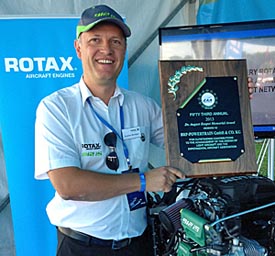 At AirVenture 2013 Rotax Aircraft Engine executive Christian Mundigler accepted the EAA August Raspet Award on behalf of the company given for their work to advance light aviation. 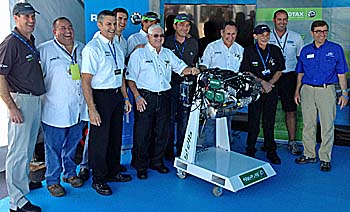 Rotax Aircraft Engine’s North American team poses by the 912 iS engine in the company’s Oshkosh display. Joining the photo at right (blue shirt) is EAA’s Charlie Becker who had just presented the August Raspet award.

Although Rotax Aircraft Engines successfully power approximately four out of five Light-Sport Aircraft, some in legacy general aviation companies still derisively refer to the liquid-cooled, high-revving, smaller-displacement engines as “just one of those snow mobile engines.” I believe they are woefully under informed but old habits can be hard to break. Many mechanics are expert in working on Lycoming or Continental engines — the powerplants of American aircraft for many decades. However, some of these technicians are not expert on the new technology of a Rotax engine and to divert attention from their lack of expertise some dismiss what they do not know. That is shortsighted as they could be working on and earning an income from servicing Rotax as well. Fortunately, a growing number of mechanics have taken Rotax training (for example, Texas powerhouse US Aviation has six such mechanics). Yet too many GA mechanics still deploy the snowmobile engine pejorative.

Well, the naysayers might consider this: Rotax BRP, the parent company of Rotax Aircraft Engines, recently announced they built their three millionth Ski-Doo snow mobile. Since this is a substantial share of all aircraft ever built, those dismissing the company’s engine-building prowess need to rethink using a snowmobile engine in a negative connotation. The company manufactures some 200,000 engine every year, itself nearly equivalent to entire fleet of piston airplanes flying in the USA. Rotax BRP’s 9-series engines power Light-Sport Aircraft and many kit-built aircraft plus many more thousands of aircraft described with other terms around the world. Throughout 40 years since 1973 Rotax has delivered more than 125,000 aircraft engines including more than 46,000 of the 9-series engines (80- and 100-hp 912, turbocharged 115-hp 914, and new fuel-injected 912 iS).

The newest 912 iS was released with great fanfare in 2012 and company manager Christian Mundigler updated media and interested parties at press conferences at Aero and AirVenture 2013 (photo). In the year since the 912 iS was introduced Mundigler reported that “several hundred” 912 iS engines have been delivered. The Austrian company has worked with 22 Original Equipment [airframe] Manufacturers to achieve 26 model installations and they are presently working with another 23 OEMs. Mundigler, who also serves on the board of directors for LAMA (see Christian’s bio) and LAMA Europe, was pleased to update media journalists at Oshkosh with a report that the fuel efficiency of the 912 iS has proven even better than predicted. “Fuel efficiency is 36% better than the 100-hp 912ULS if you fly in eco-mode, which is below 97% throttle setting.” Numerous users of the 912 iS engine concur, reporting cruise flight fuel burn rates below 4.0 gallons per hour. The engine can operate on 100LL, premium autogas, or any mix of the two. The engine runs cleanest on mogas, say numerous Rotax experts and this fuel choice further holds down cost of operation. Several LSA can achieve 30 mile per gallon efficiency even at 125 mph, making these models very low cost transportation aircraft.