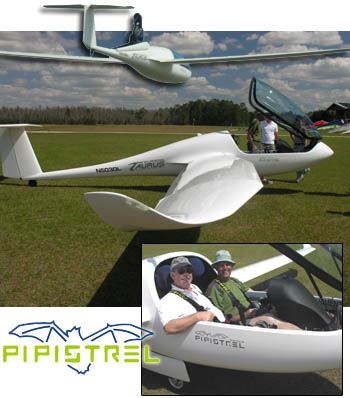 Once aloft and catching thermals, Dave (left seat) and I removed our headsets, listening only to a bit of air flow and the chirping of the variometer that tells you if you’re in lift or sink. Sweet! With its center instrument panel, leg room is abundant. Taurus is flown with an Experimental–Air Race designation.

Some of you know the Pipistrel line. Americans have seen two of their models: the Sinus and Virus (yep, those awkward, even distasteful names…except representatives prefer to say SEEN-us and VEER-us). Fortunately Taurus is easier on the American tongue, thanks to Ford and its auto model by the same name. *** I discovered Taurus is also easy on the ears as I went for a two-hour soaring flight from Wallaby Ranch with my hang gliding friend, David Ledford. His side-by-side Taurus — roomy for a soaring machine — glides beyond 40:1 and manages a sink rate barely more than 100 fpm. Those numbers translate into plenty of soaring power as we proved on a day with modest convective lift. *** Taurus is a self-launched sailplane, rather than a motorglider like Urban Air’s Lambada or Pipistrel’s own Sinus. To get aloft, we were powered by a Rotax 503 two-stroke engine that fits neatly into a cavity aft of the cockpit. Taurus’ main landing gear retracts into the belly and once you’ve gotten 3,000 feet or so above the surface, you shut down the engine, straighten the prop, and electrically hide the noisemaker under doors that shut tight. Then, ahhh…the silence starts.