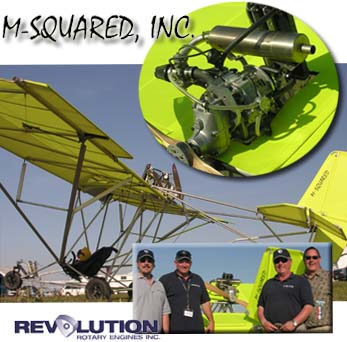 At Sun ‘n Fun 2008, M-Squared showed their new Part 103 Breese SS with the Revolution rotary engine. The effort is a collaboration with the Canada-based company represented by CEO George Payne (second from right) and Sales & Marketing Manager, Ray Anderson (second from left). M-Squared founder, Paul Mather (at far right), has been appointed the southeast U.S. distributor.

In the late 1970s, Mazda popularized the rotary engine for their RX-7 sports car. Such engines are particularly known for their smooth running operation. Many aviators can appreciate low-vibration powerplants but especially those flying the lightest of recreational aircraft, namely Part 103 machines. *** Now, M-Squared has partnered to offer such a combination. Revolution Rotary Engines Inc., a Canadian-based manufacturing company located in Markham, Ontario connected with M-Squared‘s Paul Mather to exploit the possibilities of rotary power. At Sun ‘n Fun 2008, M-Squared showed a single place, strutted Breese with the R301A single cylinder rotary engine supplying 35 horsepower. Installed on M-Squared’s lightweight Breese SS (single seat), the aircraft is said to remain within 103’s tight parameters (assuming the buyer does not insist on options and accessories that would bump it over weight). *** The single rotor aircraft engine looks compact and weighs a reported 40 pounds. Paul found the 35-hp powerplant delivers good climb performance. *** The still unnamed model (Sun ‘n Fun visitors were invited to help name the new aircraft) is offered at a modest price of $14,995…and of course, it being a Part 103 machine, buyers need no pilot’s license, no medical, and the vehicle need not be registered with FAA. Sweet!