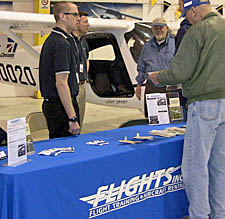 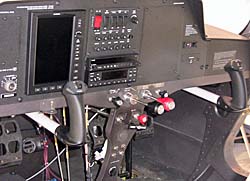 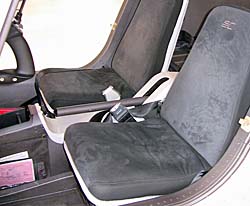 Though basic, Skycatcher is comfortable. See a full-length pilot report. 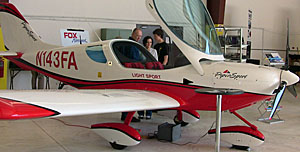 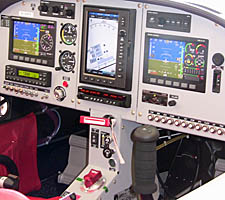 With all the electronic goodies installed, students get a modern training platform.

“Cessna is one of the most recognized names in the aviation industry. Last year it lead the LSA market for new registrations. So I was surprised to hear again and again, ‘Look, there’s a Skycatcher; this is the first time I’ve ever seen one.’ Honestly, I heard that phrase or one very similar to it at least 30 times!

*** “Flights, Inc., was at the Rocky Mountain Light Sport Aircraft Expo for the first time. They operate one of the largest Part 141 flight schools in Colorado, teaching with Cessna 172s and 182s, Piper Seminoles, and now, the Cessna Skycatcher. ‘The Skycatcher is the only light sport aircraft built by a mainline aircraft manufacturer,’ reported the big flight school. ‘It is also one of the few light sport aircraft powered by a Continental 0-200 engine.’ They elaborated, ‘This gives Skycatcher a better power-to-weight ratio than a 172, with the 100 horsepower calculating to 13.2 pounds per horsepower.’ Flights Inc., added that this gives the Skycatcher excellent short field landing and take off performance and, remember, we’re talking about a mile-high location with soaring density altitude.

*** “Flights Inc., is using the Skycatcher in a training environment and is one of the few schools that has been able to successfully market the Skycatcher, and have done a number of certifications and first solos in it. They have also found that the plane is being used more for ‘time building’ by pilots while doing cross country flights and more. They are also finding that many of their students are using light sport to enter the field of aviation and then moving up into other categories. ‘One of the reasons is that pilots realistically get a sport pilot license for around $4,000, about half the cost of a private pilot license.’

*** “For those wanting to see whether flying is something they might like Flight Inc. offers a Discover Flight for $99. After a first taste, a student can enroll in an ‘accelerated’ course where a Sport License can be obtained in as little as 30 days.

*** “Eric indicates that sales of the SportCruiser are doing well, with the biggest misconception being that Light-Sport Aircraft wouldn’t perform well at the higher density altitudes of Colorado. *** “Once Eric gets a potential customer into a SportCruiser and can demonstrate the lighter weight of SportCruiser powered by the 100-hp Rotax 912 ULS, that misconception quickly disappears. Aerosport operates a full sales and service outlet for Light-Sport Aircraft.

*** “They are also able to offer the ‘Sportshares’ program of fractional aircraft ownership. In this program a customer interested in purchasing a SportCruiser can buy a share of the craft for as little as $5,000 to $6,000. The factory will then help sell off the other shares of the craft, until all five shares have been purchased. Fox Aerosport operates from a 5,000 square foot hangar and office facility and is an authorized and trained service outlet for Rotax aircraft engines.

*** For a full explanation on the Sportshares program watch our video: