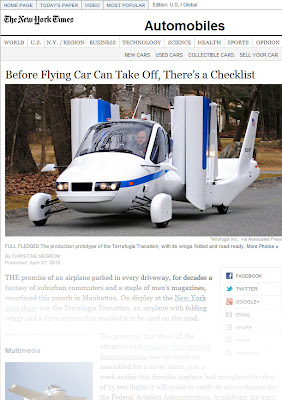 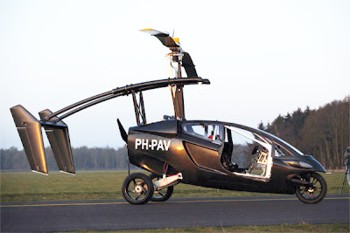 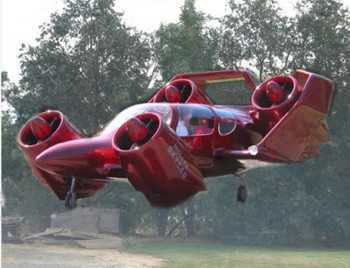 Somebody at the L.A. Times has got a sweet tooth for the flying car, specifically the Terrafugia Transition SLSA-legal “roadable” airplane. No less than six feature articles about flying cars have appeared in the prestigious newspaper’s online edition in the last month alone, in departments as diverse as Business, U.S., Nation Now, Tech Now and Automobiles, penned by a variety of journalists. *** All this attention also signifies somebody at Terrafugia is really doing a superb job at getting the word out, which has in fact been evident from the beginning: I’ve seen notices of hundreds of articles in all kinds of publications since the program was first announced some years ago.Clearly the idea of a Jetsons-style flying car continues to tickle the cultural subconscious. *** That the Transition is wildly unaffordable for most 99 percenters hardly matters: it’s kind of a kick, isn’t it, to imagine being able to fly your car anywhere, then drive around once you get there? *** Of course, it seems vastly more logical, and certainly more cost effective, to simply fly where you want in an airplane, and carry more than two people by the way, then rent a nice big comfortable car once you get there, but hey, let’s not stomp on romantic notions, alright? *** Still, I can’t help but wonder, after returning from 2+ weeks driving through the breathtaking Utah, Arizona and Colorado canyon country, how practical a flying car will ever be. *** Take the Transition: those vertical folded wing panels might not cope too well with the kind of hellacious sand/dust storms I experienced more than once driving through high desert landscapes. I was tense at times just driving our rental car! *** To be fair, it seems likely anyone who buys one of these come-to-life fantasies would be prudent to practice the same kind of weather-checking safety acumen required of any pilot before he/she climbs into an aircraft, lest they find, after a vicious gust on the highway, that the flying mission of the car was no longer possible because the wings were cartwheeling downwind all by themselves at 50 mph. I don’t mean to poke fun at the Transition or any other promising flying road vehicle, such as the Maverick (which uses a dune buggy “fuselage”, a large paraglider-type airfoil and costs $94,000 and is being marketed as a kit to avoid a mountain of regulatory hassles) and the PAL-V roadable gyrocopter, I guess you’d call it, which is indeed a cool, spacey-looking vehicle. They’re marvels of engineering and deserve our respect just for that. *** The Dutch company that produces the PAL-V, for Personal Air and Land Vehicle, just flew it’s Proof of Concept model and projects its cost at $300,000 when it hits the market in 2014. *** At 1,500 pounds though, it won’t qualify as an LSA. *** Flying car dreams are nothing new. There have been many, many designs that actually flew but most never came to market over the decades since civilian flight began. And let’s not overlook Moller International which has somehow gone through tens of millions of dollars of investor money without, so far as I’ve been able to discover, ever marketing a flying production vehicle through more than 40 years of trying. *** That doesn’t prevent the company from also showing up in the news on a regular basis, typically with yet another new design (there have been several). *** Kind of amazing how Dr. Moller’s managed to levitate through the years amidst prevalent and recurring bankruptcy rumors without ever producing a single vehicle… and it’s probably a good thing, since when these designs lose just one engine, they are heading straight for the ground. Engine technology may someday approach complete immunity from mechanical breakdown, but not in our lifetimes for sure. *** Nonetheless, last month the Transition drew admiring crowds at the New York Auto show even though it’s now pegged to cost $279,000 once it’s in production, perhaps next year. *** Enthusiasm for flying cars shows no signs of waning, not if Terrafugia’s PR people and news organs like the LA Times have anything to say about it.