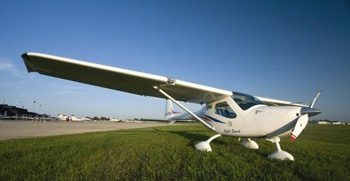 Folks with a GA background will know the name LoPresti… the late, great Roy LoPresti was a prominent aeronautical engineer who became famous for finding ways to streamline and otherwise enhance existing airframe designs to squeeze more speed out of them. *** LoPresti Aviation (nickname “LoPresti Speed Merchants”), now owned by son Curt LoPresti, just announced that it is the new east coast sales, distribution and service center for Remos Aircraft, to be based at LoPresti’s Sebastian Airport facilities near Palm Beach, Florida. *** It should be a good move for both companies as Remos Sales and Marketing Veep Earle Boyter and LoPresti can make good use of their longtime relationship. The Sebastian Airport is ideally located in the middle of a robust year-round flying community. *** LoPresti engineers will hope to enhance the Remos GX fuel efficiency — the LSA speed limit, of course, has a max of 120 knots — by bringing its speedifying technology to bear with things like redesigned fairings, cowls, aileron gap seals and other “clean-up” technologies that made LoPresti famous. [See update note below.] *** Rj Siegel (yep, that’s his first name), LoPresti’s COO, said “We believe the LSA market is a sleeping giant and we have focused our engineering expertise to support it. We feel privileged that Remos is like-minded and selected LoPresti as their partner in this venture.” *** Remos Aircraft is based in Germany. The flagship Remos GX was heavily promoted but the tough economy played no favorites. Let’s hope the LoPresti partnership brings this top-notch airplane to U.S. airports in greater numbers. Update 11/14/10 — AOPA Online reporter and AOPA Pilot editor Thomas A. Horne offered additional comments on the “speedifying” of the Remos: “We can’t make them go faster because of the 120-knot LSA speed limit,” said Curt LoPresti, president of LoPresti Speed Merchants. “But we can certainly develop wheel pants, cowlings, fairings, and flap gap seals that will let pilots fly their airplanes at higher speeds using less power and fuel.” [Horne’s article continued] “We think that LSAs have a fantastic future,” LoPresti said. “So we jumped into the market with both feet.” —DJ