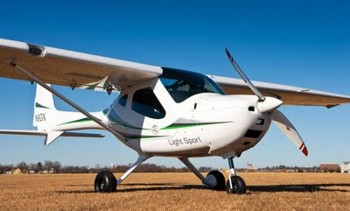 Remos, German makers of the popular Remos GX composite SLSA, has been the subject of a lot of wagging tongues the last few days. Rumors abound as to what it all means, with innuendo-slinging around the company’s alleged lack of timely disclosure surrounding its financial difficulties. *** The man who seems to have his finger on the pulse of the story and its nuances is LAMA President and Light Sport go-to dude Dan Johnson, who I talked with at length about the subject this morning. *** Dan’s ByDanJohnson.com jam-packed aviation info website has the scoop in his Splog (Sport pilot’s blog) so rather than do a thinly veiled rehash of what he told me, you can go here and get it straight from the old Pegasus’s mouth himself, and also read the company’s official release today right here. *** Short tell: word got out that Remos had a cash flow problem, was subsequently required under German finance law to file for insolvency status (not the same nor as dire a portent of financial ailment as a U.S. bankruptcy), then received another infusion of investor capital, and according to company spokesmen is sailing brightly once again into the future. *** We can all hope Remos turns the corner as the importance of its contributions to the LSA industry’s robustitude and image is undeniable. *** —photo courtesy Remos