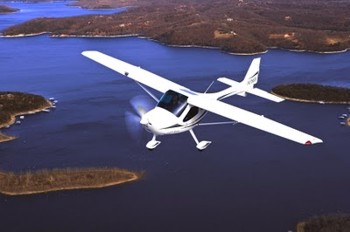 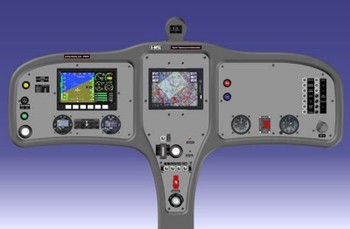 Sign of the times: cut costs wherever possible. And kudos to those LSA makers who can cut weight too! *** Remos Aircraft has a lower-priced, dramatically lighter version of its flagship GX that bears closer scrutiny. *** It’s called GXeLite, and lists at $133,924.The model is targeted at pilots, clubs and flights schools that don’t feel the need for all the latest high-tech glass and embellishments. Typically, “loaded” models like the GX and new GXNXT models price out at well over the wallet-flattening $150K mark. *** The eLite is dramatically lighter in empty weight too: just 638 lbs. (My recent flight report on the NXT listed that model’s empty weight at 718, or 90 lbs. heavier!). That would allow full tanks as well as some truly hefty passengers too, since the useful load is 682 lbs.! *** The main steps taken to lighten the load on the eLite include reinstating the composite landing gear, using carbon fiber instead of metal wing struts, new carbon fiber seats and a new instrument panel, which is lighter as well as lower. *** All of this adds up to good news for people interested in Remos. I’ve found the GX in general to be among the easiest, most enjoyable all-around airplanes I’ve ever flown. It has a wonderfully harmonious control balance, light, solid control feel, well-behaved takeoff and landing characteristics, and is simply a joy to fly.The eLite also offers a ballistic parachute safety system as an option rather than standard equipment, along with that lower-profile panel which enhances forward visibility. *** The panel still mounts a good rack of gadgets, starting off with Dynon’s workhorse D-180 EFIS/EMS panel and Becker’s Com AR6201 transceiver and BXP6401 transponder. Power comes from the proven 80 hp Rotax 912. *** Even though the lower-cost electrical system eliminates interior lighting needed for night flight (something day VFR-restricted Sport Pilots don’t deal with anyway), the eLite still has anti-collision, position and landing lights. *** An interior storage area has been removed and there is now only one coat of paint, to help with the load-lightening engineering. *** But think about that Remos diet plan: they took an already-light weight LSA airplane and managed to trim more than 11% more! *** Owners can still opt for all the Remos options the more robust models have, but I’d like to compare this lighter version to the heavier GX to see if there’s an appreciable difference in crosswinds and turbulence.