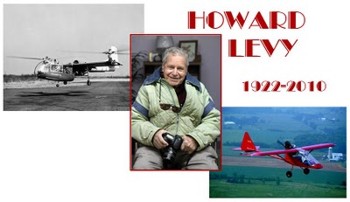 One of the truly super guys in aviation has passed away, I’m sad to say. *** Howard Levy, whom I thought of as a permanent and indestructible fixture of aviation photography, is up doing air to air shooting with his own set of wings now. *** Howie left us at 88 last week, after a long and celebrated career of 72 years shooting the airplanes he *** loved so much. *** I first met him at Oshkosh a couple decades ago. He was a mainstay then at Kitplanes and Private Pilot. *** Over the many decades he aimed a camera at flying machines, he also sold to Smithsonian Magazine, Sport Pilot, Air Progress, Jane’s All the World’s Aircraft, AOPA Pilot and a hangar full of other publications. He was also a staff editor at Look magazine for 25 years, something I hadn’t known, and once mentored a young up-and-comer named Stanley Kubrick, who went on to become the legendary film director. *** Kitplanes gave him a Silver Anniversary Lifetime Achievement Award, one of several accolades he earned. *** Howard was a founding member of the American Aviation Historical Society in 1956 and the Aviation/Space Writers Association. *** He shot for the Army Air Corps in WWII in Africa, Sicily and Italy and was still shooting last year at the airshows. *** I’ll remember his quick smile and exuberant good nature always. *** Thanks Howard for all the many many thousands of terrific images. You’ll be missed by everybody who had the good fortune to know you. *** —image of Howard courtesy his friend Glenn Stott. Airplanes…by Howard Levy, of course