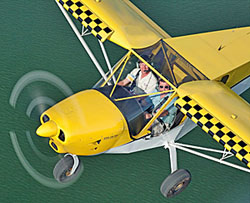 CH 750 in flight with British aviation writer Dave Unwin in the pilot’s seat and Zenith factory expert Roger Dubbert in the right. 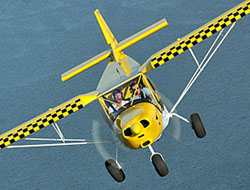 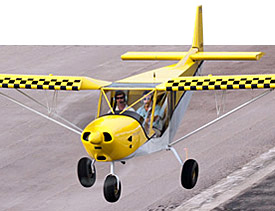 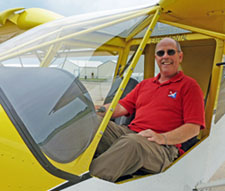 Lucky me… testing the wide-body 750 at Zenith Aircraft in Mexico, Missouri.

Some say LSA are too expensive. With some topping $200,000 (or even more), that rings true… in some cases. Yet more budget-friendly models are available and Oshkosh 2012 unveiled another. Now Zenith Aircraft‘s kit STOL CH 750 is available as a fully-built LSA. The price? A bargain $74,900, an intro price, admittedly, but regularly it’ll still be only $84,900. By any measure, that’s a good deal. Take the intro price back to when LSA was announced in summer of 2004 and the figure would be barely over $60,000, just as most expected then.

*** The new manufacturer is Tenn-Air run by Pete Krotje (already active with Jabiru and Arion) who licensed the design rights from Zenair Ltd., to produce the all-metal high-wing as a SLSA. The updated 750 offers a much larger cabin compared to the still-produced 701. It is powered by the 120-hp six-cylinder Jabiru 3300 engine, has a EIS engine monitor system, Garmin SL-40 comm radio, intercom, Sensenich prop, basic flight instruments, and 6×6 tires at the low introductory price though you can spend a bit more for full glass panel displays. Deliveries are available for November 2012 and a $2,000 deposit starts the action.

*** Shelbyville, Tennessee-based Tenn-Air buys 750 kits from Zenith Aircraft and — taking good advantage of the match-hole CNC production — assembles the kits to LSA standards. The 750 was introduced in 2009 to bring increased cabin width and broad visibility to the Sky Jeep, as its owners often call the model.

*** “We offer kits that are easy and quick by all measures,” said Zenith, but they realize many pilots prefer to be flying rather than building. “We’re pleased that our STOL CH 750 will be available at a very reasonable price as a factory-assembled aircraft,” stated Sebastien Heintz, owner of Zenith Aircraft Company. He noted that AMD of Georgia previously manufactured a significantly more expensive SLSA version of the aircraft with a Continental O-200 engine, but ceased operations a number of years ago.

*** STOL CH 750 is optimized for off-airport operations and short take-offs and landings utilizing fixed wing leading edge slats and other high-lift design features. My own experience flying the model at Zenith’s facility last summer proves take-off roll can be just 100 feet yet I observed cruise at around 100 mph. Stall speed in the low thirties.

*** Sitting level on standard steerable tricycle gear, I found entry and exit easy and 750’s cabin is roomy thanks partly to large bubble doors. Other new features include available adjustable seats and a raised cabin for more head room.

*** So, if you’ve been one of those lamenting the high cost of LSA, well, you have a few other worthy choices, but TennAir brings a new one.