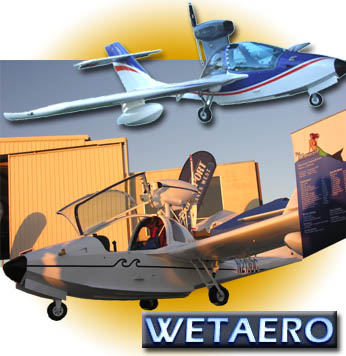 The first amphibian to achieve Special Light-Sport Aircraft status (in February 2006), Mermaid also helped break the infamous “repositionable gear” logjam. The $149,000 Mermaid is available with a Rotax 912 or Jabiru 3300 engine.

Some LSA enthusiasts know of a struggle between Czech Aircraft Works and an investor group called Slavia Capital. The latter has been aggressive in their attempts to take over CZAW…unsuccessfully, thanks to the bulldog tenacity of American founder, Chip Erwin. Despite the battle, while CZAW has done well with their SportCruiser in 2008, climbing to the #8 position in overall registrations. Yet something had to give; CZAW’s amphibious Mermaid never entered production. *** Now Mermaid is returning to the market under the name Wet Aero, Inc., though you know proprietor Danny Defelici as the U.S. partner to CZAW. While the SportCruiser builder fends off the aggressor, Defelici said, “I felt it was necessary to get [Mermaid] into production.” Wet Aero has set up its own facility in Kunovice (near CZAW) in the eastern Czech Republic to manufacture the flying boat’s major aluminum sections. Final assembly will occur at the Wet Aero’s Indiantown, Florida base. “We have five aircraft that are in the finishing stages of putting the engines on,” says Defelici. *** You can check specs here but one big development is the availability of either the 120-hp six cylinder Jabiru 3300 or the 100-hp four cylinder Rotax 912S.