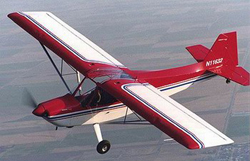 This S-7 Courier served as RANS’ test bed for most of the certification changes to achieve Primary Category FAA approval. RANS factory aircraft have always had a superb finish quality.

Twenty years ago, RANS first introduced their S-7 Courier (named after one of designer, Randy Schlitter’s favorite airplanes, the STOL Helio Courier). The S-7C is one of only two aircraft to qualify for FAA’s Primary Category certification and now it is nearing approval as a Special Light Sport Aircraft (SLSA). While you can still buy any RANS model as a kit, the company says, “For $75,000 you will be able to purchase a fully equipped S-7S, with such amenities as Garmin moving map GPS/COM, and Transponder.” RANS is included in my report on popular American producers and their plans for Light-Sport Aircraft in the January 2006 issue of Kitplanes magazine.