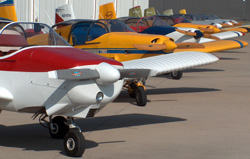 IndUS Aviation is working hard to establish their India-based component fabrication for final assembly in the USA. But in 2005, all their T-211 derivatives were “Made in the USA.” Watch for my T-211 Sky Skooter report in the 2/06 Ultralight Flying!.

As we prepare for a new year of Light-Sport Aircraft, companies are ramping up production to assure greater supplies of aircraft. Leading companies have each claimed 2005 deliveries of 20-40 aircraft but are forecasting double to triple that number for 2006. Aircraft such as the Jabiru and Allegro — plus others yet to formally announce their plans — bring component parts to the USA for final assembly complementing U.S. production by companies such as IndUS Aviation (see photo), Legend (building a new plant), and RANS. The new year should be an exciting one, indeed. As the year closes, I’d like to add my voice to those thanking LAMA founder and president, Larry Burke, for his decades of work to nuture the industry organization. He is stepping back — becoming Chairman Emeritus — while myself and Tom Gunnarson take over the reins. THANKS, Larry…for a job very well done!