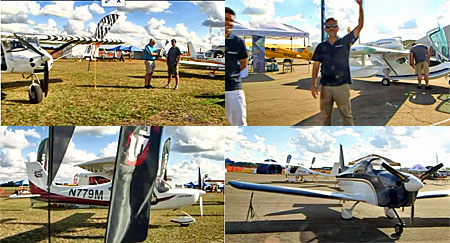 If you did not get to DeLand Showcase 2017, the second running of this new LSA, light kit aircraft, and ultralight show, we’ve given coverage with more to follow, but you might really like the quick view of most aircraft on exhibit at the event just concluded.

As some were starting to pack out on the later hours of the last day, Videoman Dave and I did a quick race around all the airplane exhibits. We’ve done this before and viewers seem to like it as it provides a bit of information about many airplanes while providing an overview of how the event appeared.

The video speaks for itself and we hope you enjoy.

I marvel at how efficiently and quickly Videoman Dave assembles these videos. This one was especially fast but he will be putting some major hours assembling a whole batch of perhaps 30 new interviews plus several fresh Video Pilot Reviews (VPRs). Each one of the latter can take an entire week or more of effort to edit into something you enjoy.

I urge your support of his very popular video channel (a claim I make on his behalf as folks spend one and a half million minutes a month watching!). If you like what you see, please consider supporting his channel. You can sign up for a year — an excellent value — or you can take a lifetime subscription — which is such a good deal I don’t know why you haven’t already acted. Do so before he changes his mind about the lifetime deal.

Meanwhile, enjoy DeLand on the last day of the event…