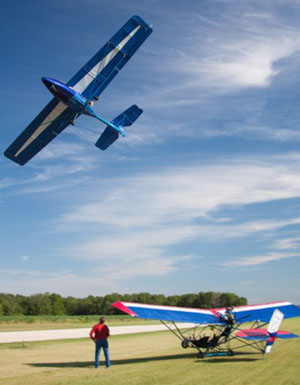 Quicksilver's GT 400 does a hard break over the Sport 2S 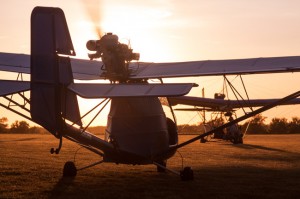 Smooth-air, dawn and dusk flying is one of the great pleasures of the ultralight experience. 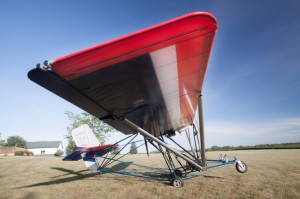 The MX Sport 2S with struts and full-span ailerons is a treat to fly. 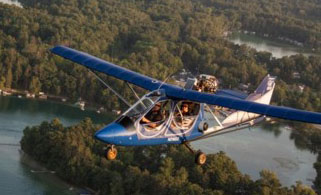 Last Spring I had the pleasure of photographing the several aircraft that make up the stable of the re-emergent Quicksilver Aeronautics company. Quicksilver is the once-and-future, Cessna-style flagship of the ultralight industry back in the 70s and 80s, when it sold almost 15,000 single seater and two-seat aircraft kits under the FAA Part 103 regulation.

What always blew me away about Quicks, beyond their easy-to-fly, docile performance and truly bugs-in-teeth fun personality was the impeccability of the kits themselves. I haven’t seen one in years, but according to people I’ve talked to, they’re even better than they were back then…and that’s saying something! Quicksilver kits were the epitome of how a kit should be produced for sale. If you ever put together a Revell plastic model then you’ve got some idea of how a Quick kit arrives. All the anodized aluminum structural tubes for example are predrilled, immaculately finished and vacuum shrink-wrapped onto large printed cardboard sheets that individually identify every piece right where it’s “mounted” onto the sheet. Inventory is a breeze, and assembly doubly so, since you don’t cut open any clear blister pack of parts until you actually need them. Believe me, having built my share of hang gliders and ultralights in those days , including several Quicksilvers for a company I worked for, being able to keep track of hundreds or thousands of parts that can easily disappear in the shop is a real boon. Quicksilver kits also really are, by and large, giant Erector Sets. If you’re even halfway decent following instructions, and Quick instruction manuals are wonderfully thorough, you can breeze through the assembly in a matter of a few days, rather than the weeks or months or even years more typical of EABs.

You couldn’t be blamed, therefore, for thinking, with this high degree of prefabrication, that Quicksilver kits would stumble on the 51% requirement of the FAA Experimental Amateur Built (EAB) category. Yet just today Quicksilver Aircraft announced five of its kits have just passed the FAA’s EAB criteria. Congrats are due. Joining the ranks EAB aircraft are the Quicksilver MX Sport, MX II Sport, MX Sprint, MX II Sprint, and the Sport 2S. Two models are single seaters and three are side-by-side two-seaters. Check the choices at the FAA list of all Amateur-Built Aircraft kits.

In a release, Will Escutia, president of Quicksilver Aircraft, said “FAA’s visit proved the company under new leadership is maintaining the high standards for which Quicksilver has been known.” Ops Chief Dan Perez went on to talk about the two LSA-style models, the GT 400 enclosed single-seater and the GT 500 enclosed tandem two-seater. “Both GT series models have already been approved and, with the MX series, all appear on the FAA’s approved kit list.” That brings the Quicksilver fleet to seven EAB models. Quicksilver, which had quietly soldiered on in the ’90s and 2000′s until Mssrs. Escutia and Perez bought the company, received a fresh infusion of greenbacks and is more aggressively marketing it’s time-proven products. Production will continue in Temecula, California, the long time home of the company.

For our corner of the aviation galaxy, the GT 500 will be offered as an SLSA in the future. The company is currently going through the ASTM certification process. Some of you may remember that sunny day at Oshkosh (1993) when EAA’s then-President Tom Poberezny and Lyle Byrum, flamboyant former head of Quicksilver, jointly announced the first-ever aircraft approved by FAA to live under the Primary Aircraft category, which can be seen a kind of precursor to the Light Sport Rule.

There are many Quicksilver dealers throughout the country and around the world. Thousands of fun-flying Quicks are flying in nearly 100 countries, with an enviable safety record. Pricing isn’t posted online: Contact your local dealer.